Bollywood actor Salman Khan, who recently wrapped up the shooting of Kisi Ka Bhai Kisi Ki Jaan, was seen on the sets of Patna Shukla. Produced by Arbaaz Khan, the film stars Raveena Tandon and Satish Kaushik among others. The actor visited the sets of the film recently and met the cast and crew. 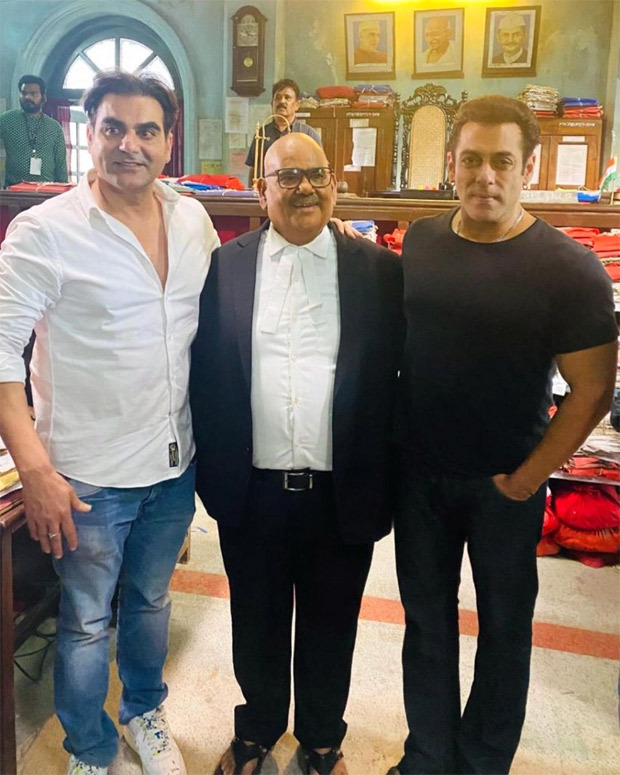 Salman Khan is all smiles as he meets Satish Kaushik, Arbaaz Khan on the sets of Patna Shukla; see photos

Salman was seen donning an all-black outfit. Satish Kaushik shared the photos on social media and wrote, “It was a great moment of pleasure for the unit of Arbaaz Khan’s film Patna Shukla when superstar Salman Khan dropped in at the shoot to wish everyone for the progress of the film.”

He added, “Raveena Tandon we missed u in this picture.” In response, Raveena Tandon commented, “Haan I just left! And he dropped in…”

Previously, expressing his excitement for the film, Arbaaz had said, “I guess since it’s a social drama and we have been known for making hardcore masala flicks, everyone is calling to know more about the film. Yes, it’s a social drama but since we as a production house believe in entertaining our audience, the film has (been) written like that. Patna Shukla has all the ingredients that an Indian audience wants to watch.”

He added, “Wait to see Raveena in a never seen before avatar. Even when she was at a peak of her career while doing hardcore masala movies, Raveena never turned her back on meaningful cinemas. Patna Shukla is the perfect example of pure cinema meets entertainment.”

Meanwhile, Salman Khan will next be seen in Kisi Ka Bhai Kisi Ki Jaan, which will hit the theatres on Eid 2023. The actor has, so far, unveiled several looks from the movie and even a teaser video. The film also stars Pooja Hegde, Venkatesh Daggubati, Jagapathi Babu, Jassie Gill, Siddharth Nigam, Raghav Juyal, Shehnaaz Gill and Palak Tiwari. It is directed by Farhad Samji and bankrolled by Salman Khan Films.

Salman will also be seen in Tiger 3 which will release on Diwali 2023. Directed by Maneesh Sharma and produced by Yash Raj Films, the film marks his reunion with Katrina Kaif. The actor has a cameo in Shah Rukh Khan’s Pathaan which arrives in theatres on January 25, 2023. He has another cameo in Riteish Deshmukh’s Marathi directorial debut Ved.