Ahan Shetty, son of actor Suniel Shetty,  is all set to make his grand Bollywood debut with Milan Luthria's film Tadap. The film which stars Student Of the Year 2 fame Tara Sutaria, is a remake of the Telugu blockbuster RX100. Before it hits the theatres, producer Sajid Nadiadwala planned a special premiere for his industry colleagues, and the red carpet event was attended by the who’s who of Bollywood including superstar Salman Khan. 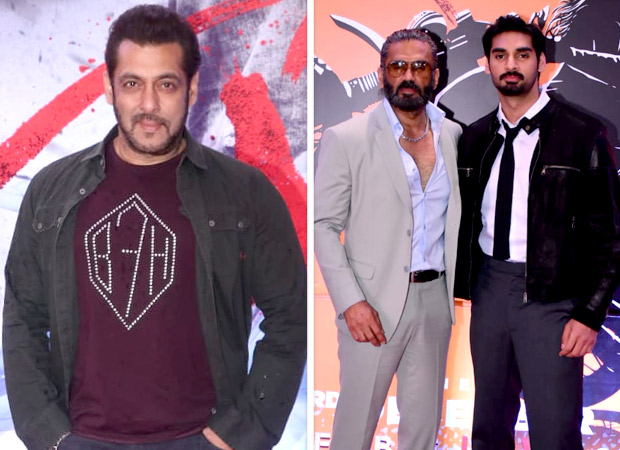 Videos and pictures from the star-studded red carpet premiere are going viral on social media. In one of the videos, Salman Khan, in a sweet gesture, was seen kissing Ahan Shetty's poster. Impressed by the gesture, Suniel Shetty hugged Salman, and the duo posed for the paparazzi along with Ahan.

Salman and Suniel, who have been a part of the industry for over three decades, share a close bond. Salman had also launched Suniel's daughter Athiya Shetty in his home production Hero. The movie also featured Aditya Pancholi's son Sooraj.

Tadap is a film featuring Ahan Shetty in the role of an obsessed lover who falls head over heels in love with Tara Sutaria's character. The film which will mark Ahan's debut will be released on December 3, 2021.