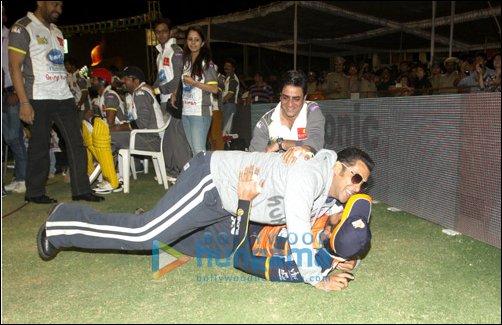 CCL matches, featuring movie stars from across the country, seem to have become a major hit amongst the film and sports lovers.

During one of the matches in Hyderabad, Salman Khan was standing by the boundary line cheering for his team Mumbai Heroes. Along with Salman was Riteish Deshmukh, whose team Veer Marathi had won a match earlier in the day as well. Riteish had suffered a hamstring injury and was in a bit of pain when Sallu decided to cheer him up by cracking a joke.

Before you knew it Sallu and Riteish were literally 'Rolling on the Floor Laughing' (ROTFL) as can be seen from these pictures.

One can say that Sallu and Ritesh surely seem to be enjoying CCL tournaments more than others.

However, post the match Salman Khan was furious with the organizers in Hyderabad, for lapses in security. The Ek Tha Tiger actor was stunned, when a group of bikers followed his car from the Lal Bahadur Shastri Stadium to his hotel.

According to sources, the bikers, who were apparently his fans, started banging the sides of his car to get his attention. The actor was furious at the organizers and the police department for their carelessness with regard to his safety. Apart from his safety, Salman was worried that a major accident could have been caused due to the incident.