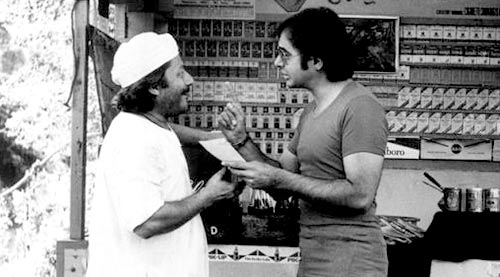 In Sai Paranjape's 1981 film Chashme Budoor, three flat-mates smoke cigarette after cigarette as they devise ways to win over the girl all of them like. When they run out of stock, the bachelors attempt to get their friendly neighbourhood paanwala to loan them some. Lallan Miyan, however, is smarter than that: seated in a shop no bigger than a kiosk, dressed in a pyjama and a vest to counter Delhi's sweltering heat, he knows the boys won't be paying for the cigarettes any time soon. So he makes them the unwitting audience to his shayari and takes on the role of adviser in matters of the heart.


Saeed Jaffrey's role as Lallan Miyan is no more than 10 minutes long but few of those who have watched the film will forget him. The humour, the lyricism and the flourish he lends this character make it a memorable one.


Most of the people who have known Jaffrey will say that these traits also best define the actor. "Intelligent humour and liveliness, I remember him bringing a lot of that to the sets when we worked on Chashme Budoor," says actor Rakesh Bedi who played one of the three friends in the film.


A popular face of Hindi cinema who was equally known for his work in British television and theatre, Jaffrey, 86, died on Sunday in the UK where he has been residing for nearly three decades.


Looking back at his filmography, he emerges as one of the few Indian actors to have a successful parallel career in the UK. From the 70s right up till the 90s, he moved between mainstream Hindi cinema - usually as a lovable patriarch- a variety of characters in the Indian indie scene, and British television and theatre. He worked with the likes of Satyajit Ray as well as James Ivory.


With equal ease, Jaffrey played a slothful nawab alongside Sanjeev Kumar in Ray's Shatranj Ke Khiladi (1977), Sardar Patel in Richard Attenborough's Gandhi, a Catholic fishermen and father to Dimple Kapadia in Saagar (1985), and the suave Punjabi owner of a high-end restaurant in London, Jimmy Sharma, in the British comedy series Tandoori Nights. What he brought to each of them was a certain dignity that endeared the character to the audience.


British journalist and author Mark Tully who had known him since the 60s, in one of his interviews recounted how Jaffrey's talent for mimicry and his humour would tickle him often and helped them forge a bond when they were both working in the programming department of BBC's World Service in the UK. Tully added that they continued to meet even after he had moved to Delhi. Each time Jaffrey would visit, he would bring his own alcohol and water. "I always told him that he knows I have whisky in the house and that I've lived here for 20 years without dying of water-poisoning, but it makes no difference: he still brings them," said Tully in the piece.


Alcohol, however, eventually also affected Jaffrey's career and reputation. It is widely known that his addiction was partly responsible for his ill-treatment of his ex-wife, chef and cookery show host Madhur Jaffrey. After separating from her, the actor stayed on in the UK and continued to pursue assignments that came his way in both India and the UK. He later married his manager, Jennifer.


Over the last decade or so, Jaffrey remained mostly reclusive, battling the addiction, taking up select work. The actor was last seen in an Indian production back in early 2000s. In 2011, he lent his voice for a radio show to read out Vikram Seth's A Suitable Boy.