We all know that Taapsee Pannu and Bhumi Pednekar are neck deep in shooting for their next, Saand Ki Aankh. Considering that the film is based on real incidents, the actresses are leaving no stone unturned to get all the nuances right. They will play shooters for the first time and even underwent training sessions for the same. Now that the filming has started off in full swing, the actresses have been sharing a few photos from the sets of the film. 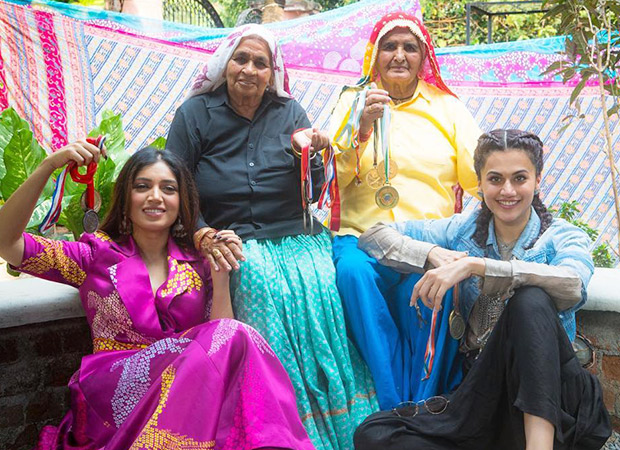 Recently, Taapsee Pannu and Bhumi Pednekar took to Instagram to share a few glimpses of their pictures from the film. The latest one has the two actresses dressed up in character and wishing their fans on the occasion of Holi on Instagram. However, yet again the actresses have posted photos hiding their faces. Well, we all know that there is a reason for the same. The makers are not keen on giving away their looks since they are playing the roles of women double their age!

Yes, many would not be aware that Saand Ki Aankh tells the story of octogenarian shooters, who started shooting after the age of 60 years. The plot is an interesting tale of Tomar sisters-in-law, Prakashi and Chandro Tomar who became shooters at a very later stage in their lives. However, the two of them have inspired many and continue to win medals for their immense talent. Interestingly, both of them are also providing ample help to the filmmakers to help capture their story right on the celluloid.

Saand Ki Aankh is also expected to feature filmmaker Prakash Jha in a key role. The film will be produced by Anurag Kashyap and will be directed by popular Bollywood writer Tushar Hiranandani.