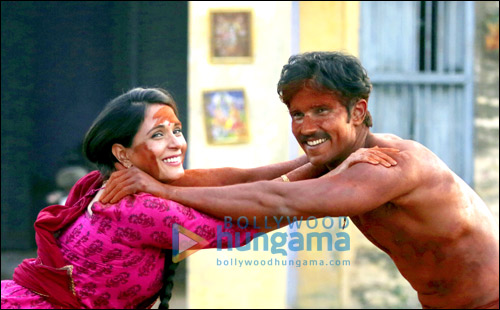 As the festival of colors Holi is all set to arrive, Sarbjit cast seems to have already started with their celebration. But this time around, we hear that they decided to celebrate in a unique way without the use of any colours.

A source from the sets has given us some inside details that while shooting for a mud sequence, Randeep Hooda who is playing the role of Sarbjit and Richa Chadha who is portraying Sarbjit's wife, Sukhpreet were seen having some fun moments in a mud pit. The duo have previously worked together and share a very special bond with each other. They were seen playing mud-holi. Richa, who is known to be always ready for some playful moments, even went ahead and applied some mud on her director Omung Kumar and in no time the entire crew got into playing mud-holi. The source added that it was the last shot of the day and Richa decided to make the moment special as Randeep and she were already coloured in mud for the shoot. So she thought it would be fun to involve the crew too. And this mud pre-holi party turned out to be a joyful moment for everyone.

Produced by T-Series and Pooja Entertainment, Sarbjit starring Aishwarya Rai Bachchan is slated to release on May 20.