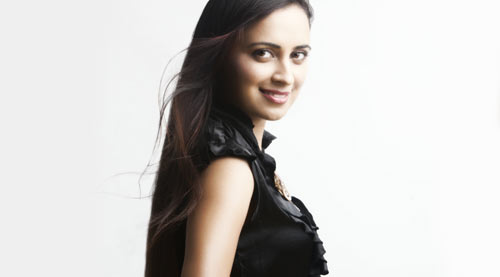 What's in a name? Well, a lot if one asks Dubai based Japinder Kaur, the pretty young woman who is making her debut as a director with Dilliwalli Zaalim Girlfriend. Though her script pretty much carried Zaalim Dilli on its cover and the entire shooting too culminated with the cast and crew celebrating the journey that had come to a happy ending, there was a surprise in store for all involved.

It was decided that the film would now be titled Dilliwalli Zaalim Girlfriend. The man who influenced the positive reinforcement? Ajay Kapoor of T-Series.

Reveals Japinder, who is in her mid-20s and has enjoyed a rather quick journey behind the camera, "When we completed the shoot of the film, we had a crisp and short title in the form of 'Zaalim Dilli'. We thought that it was a quirky title as the film is about some funny mishaps that take place in the lives of the lead protagonists (Divyendu Sharma, Pradhuman Singh, Prachi Mishra, Ira Dubey)."

However, some around her felt that the title Zaalim Dilli was not quite explaining the genre the film belonged to. Though the film is a light hearted affair with Jackie Shroff playing a fun-loving villain, there was a segment of well-wishers who felt that with the current image of Delhi being a city which is not really safe and kind for women-folk, the word 'zaalim' attached to the it may end up alienating the audience.

"The whole idea behind the title being quirky turned into this big question. Yes, I was attached to it for the longest time and hence it was difficult for me to transition into anything else. So I did ignore the suggestions for a while. However, this is the time when the music deal happened with T-Series. There, Mr. Ajay Kapoor said in a really heartfelt way that the film is very different from the title and the connotation is not right. Hence, it would be better if we change it something else which is much more fun so that a larger segment of audience can connect to the genre," details Japinder.

For Japinder, it was now time to ponder over this further. Since she is not quite new to the world of media and glamour (she started her career as a news producer and presenter with Dubai based City 7 News, got a degree in Television production, moved to Subhash Ghai's Whistling Woods in Mumbai, made award winning short films like Via Kargil, Ishtihaq and I Am Not Stupid and also assisted Prakash Jha on Aarakshan), it was now time to look for alternatives for betterment of the film's prospects.

"See, once you have made something with a particular title then you can't shift it just like that since your story and music needs to justify the change as well. I was thinking of a lot of other titles and eventually Zaalim came up well with Dilliwaalli Girlfriend," she says.

So is she happy now?


"Oh, absolutely," she smiles, "With this title, the film sounds way better now. Dilliwalli Zaalim Girlfriend has a nice ring to it; it places the genre in right perspective."