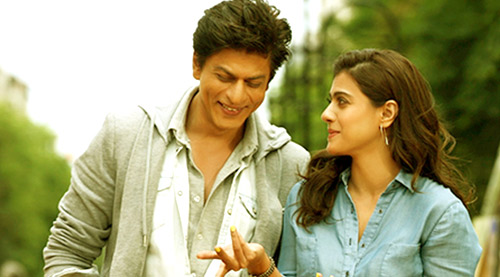 Shah Rukh Khan is busy gearing up for his Christmas release this year with Dilwale slated to hit screens on December 18. While most of the audience is eagerly anticipating the release of film that brings back the jodi of Shah Rukh Khan and Kajol, we at Bollywood Hungama hear that Shah Rukh Khan, whose production house Red Chillies Entertainment (RCE) is co-producing the film with Rohit Shetty Productions, has apparently set the target of a whopping Rs. 230 crores that will be procured from the sale of various rights. Now keeping this in mind, we give you the inside scoop and the breakup of Khan's meticulous planning.

Though there is no confirmation from the production house on the numbers (since Red Chillies Entertainment believes in not sharing any figures except for box-office collection updates) we managed to get a breakup of the same. Interestingly, RCE will be distributing Dilwale themselves in the domestic market and have already sold the rights of the film to various independent distributors for a whopping total Rs. 130 crores. At the same time, overseas markets play a big role in overall box-office collections. RCE is in talks with various distributors for overseas, out of which Yash Raj films (YRF) is a front runner and tentatively, the overseas sales is valued at Rs. 40 crores However, another fascinating point here is that the makers of the film have kept the sum of Rs. 40 cr as a Minimum Guarantee (MG), plus a buffer for overflow collections over and above this amount.

Coupled together, the revenues generated from the sale of domestic and overseas distribution rights of the film is expected to fetch the makers a stunning Rs. 170 crores.

Simultaneously, while its common knowledge that Sony has acquired the Music Rights of Dilwale, we hear that music giant has shelled out a stunning Rs. 15 crores on the same. However, a source within RCE denies this saying that the figure is rather low, "The music rights of Dilwale sold to Sony will be the highest priced rights till date within the industry, more than the Salman Khan film (Bajrangi Bhaijaan) that sold for Rs. 18 crores." However, despite commenting on this, the source refrained from disclosing the actual amount. But what is left to be seen is how the music deal between Sony and RCE pans out in terms of the beak up between a cash component and promotions component with the usual norm being a 50-50 split. However, since the film features Shah Rukh Khan, this same split may go a 60-40% way.

Further adding to this we hear that the makers of Dilwale are also in the midst of negotiations with different channels for the Satellite and TV rights of the film. In fact the minimum expected revenue from this sale as set by RCE is Rs. 45 crores. Here again Shah Rukh Khan's business acumen shines through with RCE planning on inserting an added clause in the agreement which states that if the box-office collections of Dilwale cross a certain benchmark (let's say Rs. 250 cr) at the box office, the overall rate of the satellite/TV rights would proportionately increase.

However, here comes the interesting part. With the combined sale of the rights (Domestic Distribution, Overseas, Music and Satellite/ TV) RCE stands to make a stunning Rs. 230 crores, while the production budget of Dilwale is estimated to be Rs. 75 crores (Cost of Production Rs. 60 cr + Print & Advertising Rs. 15 cr) excluding Shah Rukh Khan's fees. Thanks to this effective and meticulous planning, the makers of the film, RCE and Rohit Shetty Productions, stand to make approximately Rs. 155 crores as pure profit even before the film releases.