Esha Gupta, who has been unabashed on social media, took her fans by a surprise during Valentine’s Day. She announced that her date was none other than fashion designer Nikhil Thampi.

Nikhil Thampi, who has designed for many A-list Bollywood celebs, has also made some amazing creations for Esha Gupta too. In fact the actress has time and again sizzled in Nikhil’s designs even during red carpets. Soon the actress started taking to social media to post her bonding pictures with Nikhil. 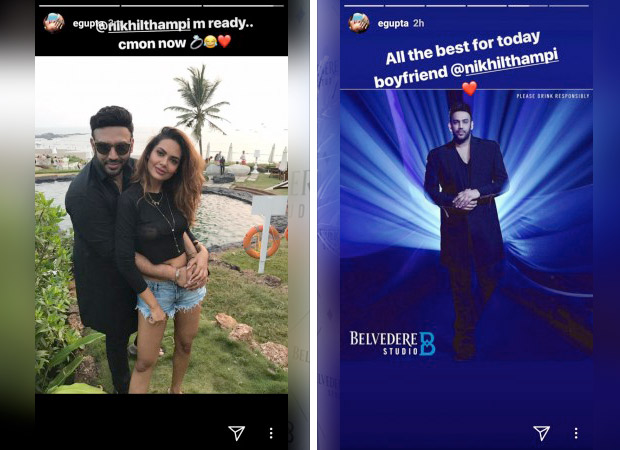 However, the rumours started becoming rife after she posted a picture of her and Nikhil Thampi during Valentine’s Day. Followed by that, what grabbed further attention was one of her Instagram story with a ring emoji that hinted towards her engagement.

Esha Gupta recently shared her Instagram story with her ‘valentine’ Nikhil Thampi that fueled up speculations. What further led to this rumour was the caption used by the actress. In her Instagram story, Esha had captioned it saying, “M Ready.. Cmon now,” along with a ring emoji.

While the same one isn’t available anymore, we hear that all of it was a joke! Yes Esha considers it to be a mischievous way of trolling her bestie Nikhil.  If reports are to be believed, Esha Gupta and Nikhil Thampi are just best friends. And all her posts from being a Valentine to her recent engagement picture is just a joke directed towards her bestie Thampi.

Although the actress hasn’t clarified on it, it is being reported that there is no truth to the dating rumours. However, considering the buzz it created in media, now certain reports assert that they certainly aren’t a couple. While Esha is yet to speak up on the current media frenzy over her love life, looks like her engagement pranks are definitely keeping her in news!

On the work front, last seen in Baadshaho, Esha Gupta will next be seen in JP Dutta’s war drama Paltan. The actress will feature alongside Arjun Rampal, Gurmeet Choudhary, Harshvardhan Rane, Pulkit Samrat amongst others.

Esha Gupta raises the mercury levels as she…