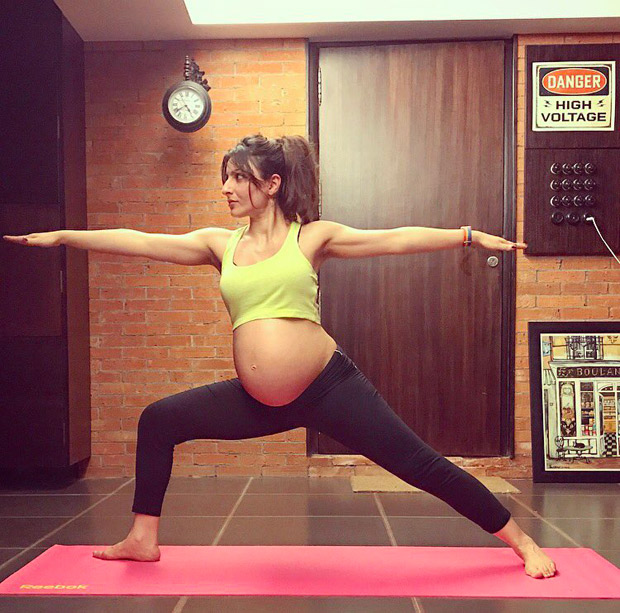 At one point, pregnant women were asked to abstain from exercising or doing anything remotely related to fitness, for the fear that it might affect the unborn baby. However, last year, Kareena Kapoor Khan tried to make a change in this aspect as she took to exercising when she was expecting. She had a safe delivery and later spoke at length about why it’s absolutely essential for pregnant women to be fit and healthy.

Now Kareena Kapoor’s sister-in-law and her hubby Saif Ali Khan’s sister Soha Ali Khan is pregnant. And she too is making it clear that she won’t compromise on fitness. She has today posted a jaw-dropping picture of her exercising despite being heavily pregnant. She is wearing a cropped tank top and her belly can be seen. She is posing like a warrior, as per the caption of the picture. The full caption is as follows, “Ready for battle #warriorpose #yogaforlife #AppleWatch #fitnessgoals”. Not many actresses would have dared to click a picture in the pregnant state in such a pose and that too by exposing her belly. This gesture of Soha Ali Khan would surely go a long way in inspiring millions of expecting mothers.

Soha Ali Khan is also currently writing a book on her personal experiences titled ‘The Perils of Being Moderately Famous’. On the film front, Soha Ali Khan was last seen in the long-delayed film 31st October, co-starring Vir Das. In the same year, 2016, she essayed a supporting part in Sunny Deol-starrer Ghayal Once Again. Last year, she also announced that she and Kunal Kemmu have got into film production and are making a biopic on the reputed veteran Ram Jethmalani. This year, they faced a legal issue after a producer, Raj Khan, claimed that it was he who had rights to make a film on Ram Jethmalani. Ram Jethmalani’s son, senior advocate Mahesh Jethmalani, however rubbished these allegations and nothing much was known about this case after that.