For decades, we always knew in theory what the audiences wanted, though there were annual shocks in store for many as well as pleasant surprises too. But by and large, from a commercial perspective after watching a film, the trade generally knew which way a film would go—soar, float or sink!

All that has changed now—and this is perhaps a part of the many paradigm shifts and massive changes we have seen in Hindi cinema. A set pattern has emerged— in which nothing is set! And this was never clearer than in the July to September segment of the Hindi film arena of 2017.

Crystal-clear catastrophes
A clear picture was seen only in the total rejects. For example in July, no one was even fleetingly interested in the very trite Munna Michael (kids, who are Tiger Shroff’s most devoted fans, were hardly taken in by this done-to-death-trite musical that even failed to have hit music), Mom (intense, but too, too predictable),  Indu Sarkar (who wanted to re-visit the Emergency, the darkest chapter in free India’s history?) or the overtly Punjabi and quite crass Guest Iin London and also Patel Ki Punjabi Shaadi. The latter, in fact, claimed to tribute both Gujaratis and Punjabis but ended up making both communities look like complete buffoons.

Though touted as a success, Babumoshai Bandookbaaz crumbled. Nawazuddin Siddiqui may be an appreciated actor, but to see a carnival or carnal sequences and crass expletives was something that was completely rejected by even adult audiences. Nawazuddin must now realize that he is not a crowd-puller the way actual stars are: he may be loved for his characters in Raees or Manjhi—The Mountain Man but films like these and Raman Raghav 2.0 clearly show where his limits—of both acting and aesthetics—cease.

At the other extreme was the latest pointless, clichéd and completely outdated example of an NRI romance, Jab Harry Met Sejal, continuing the ever-calamitous saga of confused lovers. Director Imtiaz Ali is no Nasir Husain to recycle one plot in endless garbs and get a hit each time. Despite a couple of good songs, this film met with a bad end, and the lifetime collections were shocking for a film starring Shah Rukh Khan. 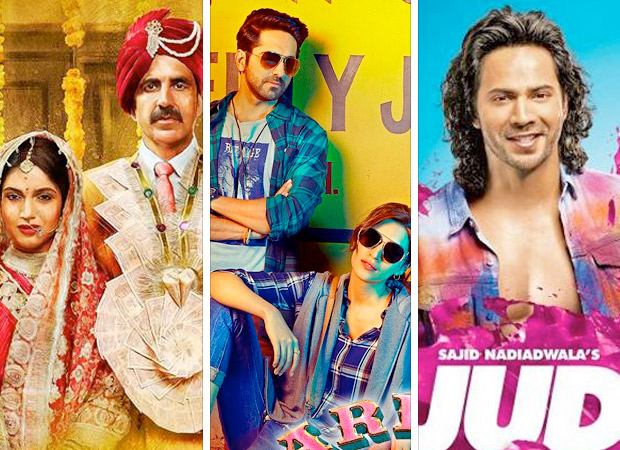 No one cared also for Daddy and Haseena Parkar, those calamities that showed that young Hindi filmmakers just refuse to see the writing on the wall. Biopics must be about positive characters and not whitewashed negative real-life individuals. The nation, for example, cannot forgive a line by Haseena that her brother could not have engineered the Bombay blasts as the city was his mohabbat! And the line even got past the censors!

September 15 saw three complete washouts—Simran, Lucknow Central and the aforementioned Patel Ki Punjabi Shaadi. It was small consolation for Kangana Ranaut, the self-styled “highest-paid actress” in Hindi cinema (!) and its official co-writer that made Simran collect more revenue than Lucknow Central. Considering budgets, Simran was a bigger fiasco than its rival release.

And speaking of rival releases, Lucknow Central and the earlier Qaidi Band, based on the same premise of a band formed by prisoners who then want to use music to escape from jail, just did not connect with audiences as a good idea for spending Rs. 150 or more per head!

Musicals also must have lyrics and music that connect big-time apart from other key virtues, and at every level, these films showed a disastrous shortfall. Qaidi Band now has the dubious distinction of being the lowest-ever Yash Raj film in terms of opening and lifetime collections.

Sanjay Dutt’s comeback vehicle Bhoomi proved that no one can afford to rest on past laurels. A hackneyed rape and revenge by a parent story treated in dated fashion does not even fire single screen audiences now—when Maatr and Mom failed, how could this do well? Omung Kumar and Sanjay Dutt need to learn constructively from this debacle if they have to undo this blot on their careers.

The pseudo-intellectual brigade that made niche cinema performed little better: Onir’s Shab just came and vamoosed, while Lipstick Under My Burka (after all the international ‘accolades’ caused by its supposedly ‘bold” anti-Indian society theme!) was praised in all the ‘politically-correct’ sections of the media. As usual, however, the film sat on the fence in the end and refused to take a stand, and was thus dismissed by the audience as being of little consequence.

Newton was saved in part by the cleverly planned (and panned!) announcement on its release day that it would be our newest entry to the Oscars. Though it was too late to think of what the world will think of India’s Oscar-competitive entry, it was enough to pull in some impressionable audience, already mentally programmed to like it, into the movie-halls! And so bad was the environment around the film that, as of now, based on a string of negative virtues, Newton has collected more than the sum of its co-releases Bhoomi and Haseena Parkar!

Surprise! Surprise!
Toilet—Ek Prem Katha was predictably endorsed by the audience with its spicy mix of message-oriented content and entertainment. And the media went in overdrive over the “now-discerning masses who preferred entertainment with substance, not just stars” when Bareilly Ki Barfi and Shubh Mangal Saavdhan rapidly followed and won audiences over.

But the audience was waiting, its thirst for entertainment, entertainment and entertainment whetted for months in the arid environs of Hindi cinema. And so was born 2017’s biggest-to-date Hindi hit—Judwaa 2. The rebooted film will at least enter the Rs 125 crore club if not higher. Stars again mattered as always, and  Varun Dhawan can be officially considered the seventh male superstar in a club that boasts of two superstars who began in the 1980s, three in the 1990s and the last one—Hrithik Roshan—in 2000!

While the film was expected to be a success (like all of Varun’s solo films until now), the sheer magnitude of the response has baffled everyone, and its success is mostly laid at the foot of its star hero, even though it is his director father, veteran of over 40 films David Dhawan, who primarily deserves the credit for what the film is and for recognizing his son’s acting prowess as well as commercial clout.

Audience is King!
And that the audience is King beyond even high content can be gauged by these perplexing cinematic mysteries. Despite collecting fair figures, both the wholesome entertainer Mubarakan and the gritty Baadshaho failed to muster anywhere near the collections expected from them. There can be theories on what went wrong—like the Punjabi overdrive of the former and the lack of enough dramatic punches in the latter, but they do not seem to fit the bill alone.

Jagga Jasoos’ failure is the best explained of the others. The inordinate delays in production had led to a strong, if unjustified, negative vibe and Ranbir Kapoor did not have the branding or box-office record to counter it. The all-new-for-Hindi-cinema format of a Hollywood style musical and an astronomical budget for an essentially Tintin-like children’s story helped do the film in. However, we dare say that for the very same reasons, the film is ahead of its times.

A Gentleman and Poster Boys were other films that were let down by the title and lack of marketing respectively. The former has been a twice-jinxed title anyway in Hindi films and indicated nothing about the film’s content, which was classic masala with contemporary touches.

Poster Boys had a very low awareness quotient and was also handicapped by the current low image of the Deol brothers and the lack of star appeal in director and third hero Shreyas Talpade. Here was a film that, if well-promoted, could have easily gone the way of Shubh Mangal Saavdhan because it humorously tackled a social issue.

So what makes a film work or otherwise? Stars, music, story, director, content, entertainment, marketing or a mix of all? Given by the outcome of the last three months, it is only the audience, which is bigger than all the other factors out there!