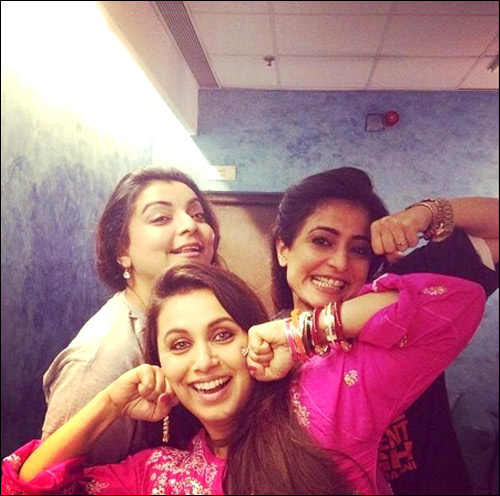 Rani Mukerji, who is riding high on the success of her latest film Mardaani, was recently spotted with her close pals, choreographer Vaibhavi Merchant and Shruti Merchant. The 'agenda' of this 'meeting' was to attend the trail of the film.


The actress was seen striking funny poses with her girl gang. Rani Mukerji who was last seen in Bombay Talkies portrayed the role of a fierce, strong headed cop fighting against child trafficking in the recent Yash Raj Film Mardaani. Almost everyone who has seen the film has been praising the film as well as Rani's stellar performance in that. Recently, Aamir tweeted, "Saw 'Mardaani' yesterday (Sunday)! Must watch, it can happen to anyone! Rani is superb. And so is the new actor who plays the villain, Tahir Raj Bhasin".


This film also holds a special importance in Rani's life considering it was her first film to release after her hush-hush marriage with the Yash Raj chairperson Aditya Chopra, son of the late Yash Chopra.


Based on the hard hitting reality, Yash Raj Films has ventured into a dark film space with Mardaani and is one of the few YRF films which has been provided with an A certificate. Directed by Pradeep Sarkar, Mardaani released on August 22 and is banned in Pakistan owing to its bold content.