Ranbir Kapoor is pretty stoked as his upcoming film Sanju, based on the life of Sanjay Dutt, is one of the most awaited films of the year. The actor has begun promotions for the film which will narrate the story of the Sanjay Dutt- from childhood to grand debut, drug phase to relationships, underworld connection and jail time. 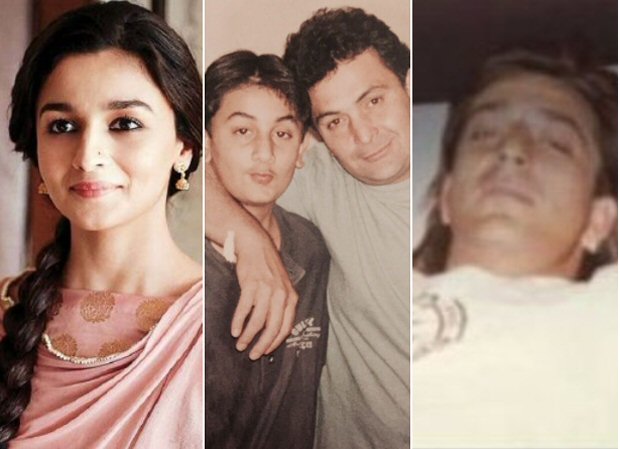 In a promotional campaign for his upcoming film Sanju, Ranbir Kapoor arrived on Twitter for a day on the occasion of Father’s Day. He took over Fox Star Hindi’s handle and answered several fan questions. Not only did he answer questions with the hashtag #JaaduKiJhappi, he shared quite a few moments from his childhood featuring his father Rishi Kapoor. He answered questions about Sanju, playing Rajkumar Hirani's hero, loving a song 'Dilbaro' from Alia Bhatt's Raazi, watching the ongoing soccer league and more.

The biggest challenge of playing @duttsanjay was to believe that I could do it. He hasn't seen it yet, but I am looking forward to his reaction #JaaduKiJhappi https://t.co/O2wHf3MvsY

Hey Spandan! What I have learned since I became a star is that I am very grateful, that I get to do what I love! #JaaduKiJhappi https://t.co/u2TQjrv2fA

I am a football fan and papa's a cricket fan! But we watched the Argentina-Iceland game together. It was fun educating him about the sport! #JaaduKiJhappi https://t.co/SYfJEkJ6fD

Hello Arno!
Absolutely! I worked with @chintskap in Besharam, but I would love to share the screen with him again. #JaaduKiJhappi https://t.co/fGUNJ7YWS9

1. Father-son moments from Jagga Jasoos
2. Son confronting his father in @TamashaOfficial
3. One of my favourite moments with Late Farooq Shaikh Sahab from Yeh Jawani Hai Deewani
4. Really connected with @AnupamPKher Sir in this scene from Wake Up Sid#JaaduKiJhappi pic.twitter.com/Hx450Su42q

When Ranbir talked about successes and failures

Hey Rakesh! I have only learned from my failures and not from my successes. #JaaduKiJhappi https://t.co/nt10U5EDym

When he revealed where he sees himself in 10 years

Hey Shambhu! Thank you for your kindness and love. I hope I can continue entertaining all of you for years to come. Thank you for all the love. #JaaduKiJhappi https://t.co/YjhVEUARnD

Hey Soumi. Meri dad se bahut phat-ti hai. I don't even know what his eye color is because I've never looked into his eye. However, Happy Father's Day papa. I love you! #JaaduKiJhappi https://t.co/SnOL0eRPrm

When he talked about his best Ayan Mukerji, his Brahmastra director

When he ended the chat by thanking everyone for talking to him. He casually was sitting on the floor with his two dogs

Happy Father’s Day papa! Love you the most. Thank you for being The Super Papa! #JaaduKiJhappi @chintskap pic.twitter.com/vGShrVUKlh

That’s all from me! Continue sharing photos/videos of you with your father, along with #JaaduKiJhappi. See you at the movies! @chintskap pic.twitter.com/EcZdgKsLDS