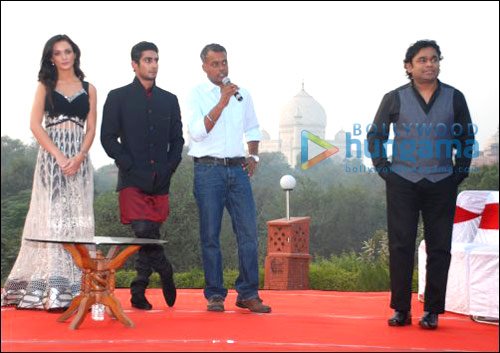 The last time that A. R. Rahman had performed at the Taj Mahal was when he had dedicated a whole album One Love to the monument of love in 2007. This time, it wasn't quite the same. Now he was back at the Taj Mahal on Wednesday singing only one track from his forthcoming film Ekk Deewana Tha, and that too after a painful journey that took almost the entire night from Mumbai to Agra via Delhi.


With flights from Mumbai to Agra cancelled, Prateik and the team had to brave a train journey from Delhi to Agra to be present on time for the release function of the music.


None of the three protagonists Prateik, debutante Amy Jackson or A. R. Rahman, who graced the Taj Mahal on Wednesday afternoon, were what one would call Hindi persons. But while Rahman and Amy chose to address the predominantly-desi North Indian crowds in English, Prateik surprised everyone by giving a very moving speech in Hindi to the crowd.


Apparently, he had spent the entire week practicing and brushing up his Hindi.


Vijay Singh, the CEO of Fox-Star (producers of Ekk Deewana Tha) said, â€œIt was a long and cumbersome journey, but one worth making. Rahman and the other musicians captured the pulse of the audience within seconds.â€


The Taj Mahal plays a very important part in Ekk Deewana Tha. It's where Prateik and Amy's characters meet first and then much later in the climax are reunited. It was therefore felt by the entire unit that the music had to be released at the Taj Mahal.