British monarch Queen Elizabeth II and the iconic Paddington Bear starred in a special sketch to celebrate the Queen’s Platinum Jubilee. The two sit across from each other for some tea in the short film shared right before the celebration in honor of the British monarch's 70 years on the throne. 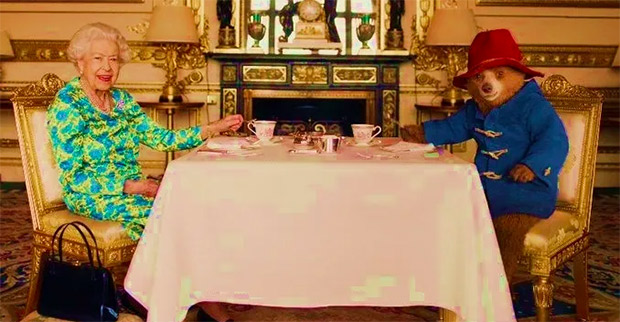 As Deadline reports, on the occasion of the Queen's Platinum Jubilee, marking the 70th anniversary of her ascent to the throne, an original short film featuring Elizabeth and the CGI bear, voiced by Ben Whishaw, premiered on the BBC. According to the report, this has been in the works for some time and managed to remain a secret while the BBC, Heyday Films, and Buckingham Palace all collaborated on it. The short sees the Peruvian-born bear congratulate the Queen on her reign, with Paddington exclaiming, “Happy Jubilee Ma’am. And thank you. For everything.” Her Majesty simply replies “That’s very kind.”

This on par if not better than the Olympic James Bond scene.
The Queen having tea with Paddington - incredible that at 96 and after 70 years on the throne she still has the power to surprise #platinumpartyatthepalace pic.twitter.com/88NP1ScpXx

The scene concludes with Paddington and Queen Elizabeth II using a spoon to tap out the beat of Queen's We Will Rock You anthem on a China teacup as the band themselves and The Corps of Drums from the Bands of Her Majesty’s Royal Marines started the song on the main stage outside Buckingham Palace, The Mall and the Royal Parks joining in unison in front of thousands of Platinum Jubilee concert attendees.

"Her Majesty is well known for her sense of humour, so it should be no surprise that she decided to take part in tonight's sketch," Buckingham Palace said in a statement. "There was an interest in the filming and animation process and the opportunity to invite a famous bear to tea was just too much fun to miss. While The Queen may not be attending the concert in person, she was very keen that people understood how much it meant to her and that all those watching had a great time."

On the other hand, no release date for Paddington 3 has been announced yet but the film is reportedly in active development with production to begin later this year.