Priyanka Chopra made her mark in the Hindi film industry and she is checking one thing at a time off her bucket list. She is living the dream and putting Indian Cinema on the world map. Chopra hosted the Global Citizen Festival over the weekend in Paris with the likes of Billie Ellish, Jennifer Lopez, Cold Play, Shawn Mendes, Camilla Cabello and several others on the performance list. 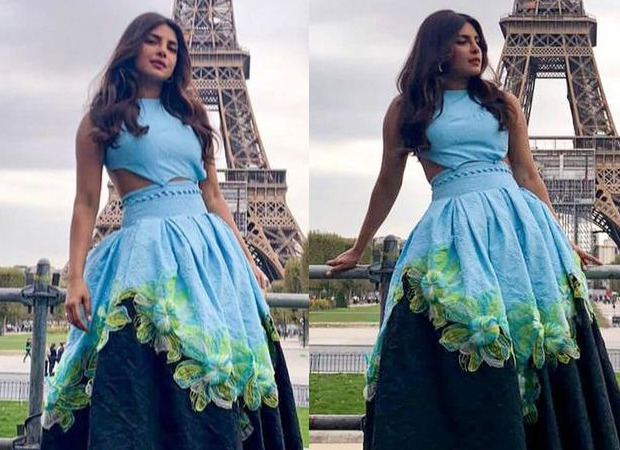 Priyanka looked like a vision dressed in a gorgeous baby blue gown with royal blue, green and lime accents. The dress featured a fitted, sleeveless top half with side cuts at the waist, a cinch to pull the top and the billowing gown together. The bottom half of the gown featured a heavy floral borderie in white and lime green with a royal blue panel. The colour blocking piece was the perfect pick for a gorgeous evening in Paris. She poses with the stunning backdrop of the Eiffel Tower. She completed the look with silver metallic pumps. Her makeup was soft with dark tinted lips and soft waves in her hair. She wore this gorgeous dress from the Spring 2022 collection of Prabal Gurung with Bulgari jewels. She also just recently became the global ambassador for Bulgari.

On the work front, Priyanka finished shooting for her upcoming film 'Text for you' starring Sam Heughan, Celine Dion, Russel Tovey, Steve Oram and Omid Djalilli.  She has also been working on Amazon Prime's spy series 'Citadel'. She is currently shooting for the series and regularly updates her Instagram army with snaps from sets. Other projects include a rom com with Mindy Kaling, a biopic on 'Ma Anand Sheela', 'Matrix 4', an unscripted Amazon series tentatively called 'Sangeet' which she and her husband Nick Jonas will produce. She also recently attended the Wimbledon game as a Ralph Lauren invitee. She also celebrated her birthday sans husband Nick Jonas. Nick and Priyanka also completed 3 years of knowing and dating each other on 20th July. Last wee, she had a ball celebrating hubby Nick Jonas' birthday on 16th September.