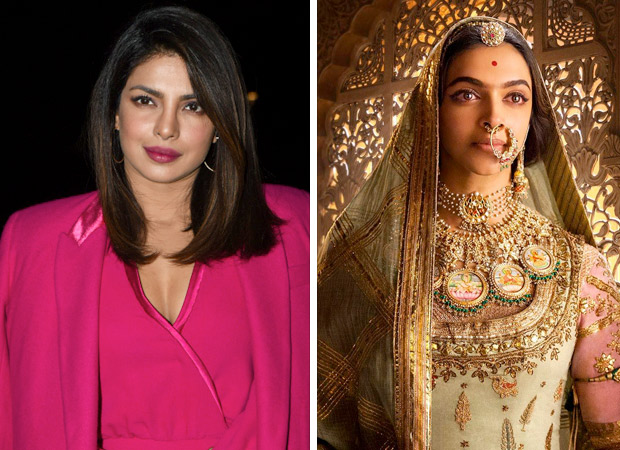 The Sanjay Leela Bhansali film Padmavati starring Deepika Padukone, Ranveer Singh and Shahid Kapoor is embroiled in several controversies due to which the release day was postponed. The film, which was supposed to get released on December 1, received a lot of threats from fringe groups. Bhansali was attacked by the Rajput Karni Sena members during the shoot while a bounty was announcement to chop off Deepika's nose and behead Bhansali.

Priyanka Chopra, who has previously worked twice with Sanjay Leela Bhansali, recently spoke at length about the controversy and why she stayed mum on it. During the Penguin’s Annual Lecture in New Delhi, Priyanka said, "I feel like I should call Deepika and Sanjay sir and tell my opinion to them. And this is exactly what I did. I called them and told I stand by them and hope that audience gets to see the film. The art that Sanjay Leela Bhansali believes in should be viewed by everyone."

Known to be fearless and someone who speaks her mind, Priyanka Chopra even stressed on the topic on why she chose to stay silent on the row. She said, "When you use my name as a public figure from Indian film industry and flash my opinion on the ticker, I feel used. By asking this question over and over again you are doing the same. You are asking me a question about another film and filmmaker instead of talking about me and my career."

When Priyanka was told that her words and opinions could still make a difference, she asked back why were these type of questions not asked to the politicians. "What can an actor or a filmmaker do to change what’s happening in the country? They are as much a part of the civil society as you or them. I am not at fault. I can have an opinion but I cannot be pushed to give it publicly," Priyanka added.

Priyanka Chopra had earlier starred in a song ‘Ram Chahe Leela’ in Ram Leela and starred in Bajirao Mastani as Kashibai. She has also worked with Ranveer Singh in Gunday and Dil Dhadakne Do. Priyanka has also starred opposite Shahid Kapoor in Kaminey and Teri Meri Kahaani.

As of now, no new release date for Padmavati has been announced. The film stars Deepika Padukone as Rani Padmavati, Shahid Kapoor as Maha Rawal Ratan Singh and Ranveer Singh as Sultan Alauddin Khilji.