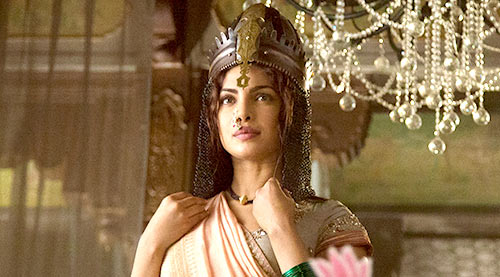 Ever since she left the disaster of Zanjeer [2013] far behind her, it has been the case of 'achche din' for Priyanka Chopra. Even though she had a relatively miniscule

part to play in the Ram Charan Teja launch pad, the fact remains that as an actress, she never disowned the film. However, better days were reserved for her, as she went and delivered four back to

back successes. These were Krrish 3, Gunday, Mary Kom and very recently, Dil Dhadakne Do.

Now that Piyanka Chopra is gearing up for the release of Bajirao Mastani, it is pretty much on the cards that she would make it five in a row.

Her turnaround is pretty commendable because after the award winning performance in Barfi! [2012], she had to suffer the ill-fated release of her decade old Govinda starrer Deewana Main

Deewana, which sunk without a trace. This was immediately followed by Zanjeer and it seemed quite unfortunate that the successes like Don 2 and Agneepath, which preceded

Barfi!, were being diluted.

However, a few smart career choices with a blockbuster material Krrish 3 coupled with a 'masala' entertainer Gunday meant that Priyanka was on solid footing. The big step that she

took at this stage was signing up for Mary Kom and that turned out to be a game changer. In a physically exhausting role that also required her to enact the part of a living legend, Priyanka

had all eyes on her. Well, she performed, and how, and in the process went up earning commercial success along with critical acclaim - a combination which is on the top of the list for any actor.

Earlier this year, she took another risk by stepping into sibling drama Dil Dhadakne Do. Though the film didn't go on to be a smash success, the fact remains that it still ended up being a

good grosser, and in the process showed once again that Priyanka is indeed an actress of caliber. As a central character in the Zoya Akhtar film, she played the vulnerable part so very well,

something that is in complete contrast to her headstrong personality.

No wonder, now that she is being seen in a traditional avtar for Sanjay Leela Bhansali's Bajirao Mastani, Priyanka is pretty much promising yet another fantastic act on screen. Yes, Ranveer

is Bajirao and Deepika is Mastani. However, even as Kashibai, one can well be assured that she isn't being a pushover, more so since it is a Sanjay Leela Bhansali affair and a woman out there ought

to have her voice, as is apparent in the way she goes about her fiery dialoguebaazi!

Will it turn out to be an even bigger outing for Priyanka Chopra when compared to her last four films? If the terrific promo is any indication, it pretty much seems like the case.