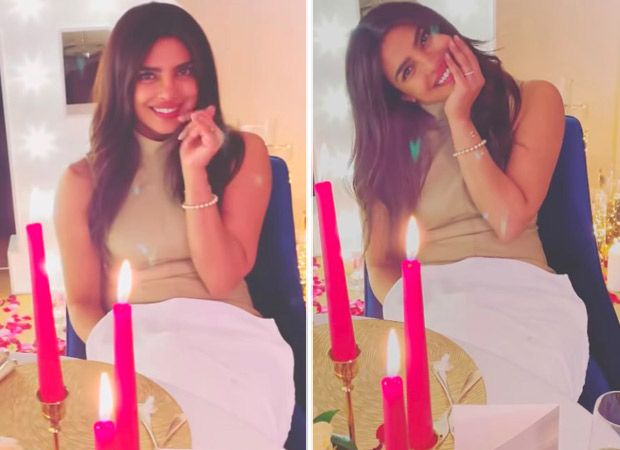 Nick took to Instagram to share a video, which showed his wife Priyanka who had love beaming all over her face as she sat at a table with candles and flowers on it. Larger candles and rose petals festooned the floor. The word ‘forever' was lit up behind her in big-big words. “3 years,” he wrote in his caption along with a heart emoji.

Meanwhile, Mrs. Jonas gave a peek into the celebration as well. She posted a picture of the table set-up with red candles, flowers and a card saying, “Found you, married you, keeping you.” In the background was a white feathery wall with a neon sign saying ‘always and forever’. “Living the dream @nickjonas,” she captioned her post and added a heart emoji.

Priyanka and Nick tied the knot in dual ceremonies on December 1 and 2, 2018 in India. They had a Christian wedding, officiated by his father Paul Kevin Jonas Sr, as well as a Hindu ceremony. Due to Priyanka’s official commitments, she has been in UK for a long time for the shoot of Citadel while her husband Nick Jonas was in the US. Recently Nick flew down to the UK to attend a red carpet event in Britain to celebrate wedding anniversary with his lady love.

On the work front, Priyanka, whose last Hindi film was Shonali Bose’s The Sky Is Pink in 2019, has signed her next Bollywood project. She will star in Farhan Akhtar’s road-trip film, Jee Le Zaraa, alongside Alia Bhatt and Katrina Kaif. She will also star in The Matrix Resurrections, Text For You.