She is everywhere! That’s right! The global newsmaker of our times, Priyanka Chopra living the glorious American dream to the hilt. Rustling up a storm every time she steps out, with her chirpy candour, sass, wit and astonishingly sartorial shenanigans, Priyanka Chopra is a trailblazer. From essaying the role of the daunting and passionate Alex Parrish in Quantico, making a Hollywood debut, serving as a UNICEF Goodwill Ambassador to hobnobbing with the crème la crème at some of the most prestigious red carpets and gracing the covers of some of the most sought after magazines, Priyanka Chopra juggles it all with signature aplomb. As the May cover girl for Elle Canada, Priyanka Chopra strikes a stunning pose, pouting and preening, looking nothing less than ravishing. This edition has Priyanka get candid about topics like how she copes with failure, why she never runs of ambition, and what quirky mantra she lives by.

Armed with oodles of confidence, endless charisma and a commanding screen presence, there isn’t a dull moment in her life. Always on the go, Priyanka Chopra calls Alex Parrish her hot alter ego but makes a poignant observation on why do women have to feel that way about it? She muses that when the world sees Bruce Willis saving the world and blowing up helicopters in a crisp white shirt, men don’t ask why you’re setting a standard for men to look like that! Additionally, she speaks about being inspired by the other achievers and being the best version of herself! Well-articulated, we say!

Styled by Isabel Dupre, the cover has Priyanka sport a high-neck ribbed short-sleeved ribbed tee by Fendi and layered with an orange cutwork jacket. Delicate rings from David Yurman are a worthy addition to her look. The shot has been beautifully captured by Nino Muñoz. (Also Read: White top, white heels – Every day is a step closer to summertime splendour for Priyanka Chopra!) 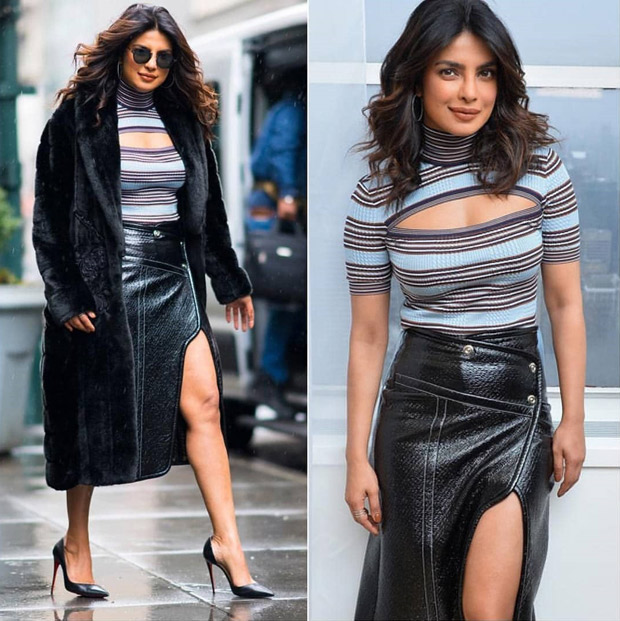 The Fendi tee sported by Priyanka distinctly reminds us of her recent outing at the Empire State Building to kick off Booking.com “Book the U.S.” List in NYC. The sleek #OOTD featured an aesthetic cut-out and a thigh-high slit black leather skirt. Keeping the rest of the look muted, Priyanka Chopra pushed the envelope for minimalism. While we can hardly wait for the rest of the pictures from the photoshoot to flood the social media, this stunning cover has us glued. (Also Read: A plunge here, a thigh-high slit there and loads of oomph – This is how Priyanka Chopra rolls post sickness!)

The May 2018 issue of ELLE Canada will be available on newsstands from April 9. On the professional front, Priyanka Chopra is all set to reprise the famed role of Alex Parrish in Quantico 3. Additionally, she will be seen in the Hollywood flicks, A Kid Like Jake and Isn’t It Romantic.