Priyanka Chopra Jonas recently was in Mumbai for a brand endorsement and spent most of the time reminiscing nostalgic memories about the city. While she has returned to her family in LA now, the couple brought in their fourth wedding anniversary together and this will be their first after they became parents to the little Malti Marie Chopra Jonas. Although we haven’t caught a glimpse of their wedding anniversary celebrations, the couple took to Instagram to shower love on each other on this special occasion. 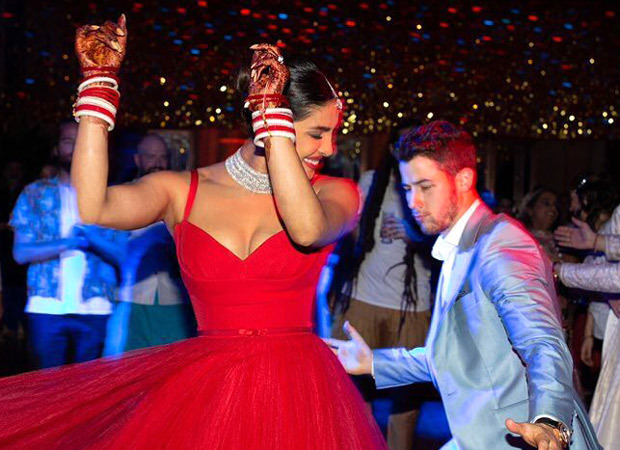 Priyanka Chopra Jonas and Nick Jonas, who tied the knot in a white wedding ceremony on December 1, took to Instagram to share photographs from the ceremony. Priyanka posted a photo from one of their wedding functions as the two of them are dancing wholeheartedly and wrote a lovely caption wishing her husband on their anniversary saying, “Find yourself a guy that reminds you everyday that you’re loved. Happy anniversary babe” and also dropped a heart emoji. Many of her female colleagues from the industry like Sonali Bendre, Dia Mirza, Preity Zinta, Bipasha Basu, extended their best wishes to the international actress on this occasion.

On the other hand, Nick Jonas posted a photo from their white wedding ceremony as they walked down the aisle after tying the knot, saying, “And just like that it’s been 4 years. happy anniversary my love. @priyankachopra” Designer Farah Khan Ali and Bollywood-Bengali actress Rituparna Sen were amongst the ones who dropped their anniversary comments on the post.

Also Read: Priyanka Chopra reveals that there were people who wanted to ‘jeopardize’ her career; says, “Focus on light, a little bit of inspiration that you might see”