Priyanka Chopra and husband Nick Jonas are currently enjoying their marital bliss. The couple, who tied the knot earlier this month, has been spending time with each other and their families. After having several wedding receptions in India, the actress and the pop star headed to London earlier this week to spend the Christmas holidays with their families. 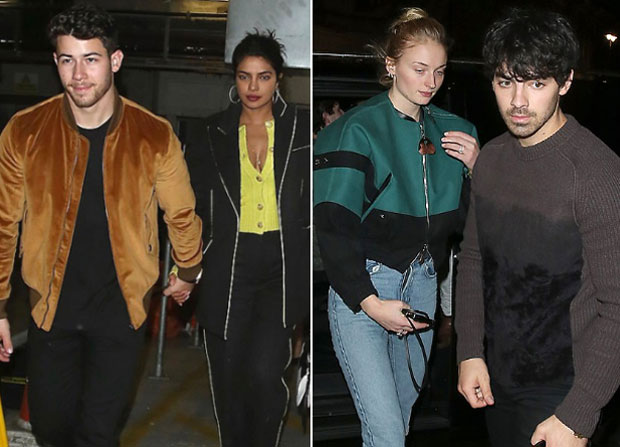 Nick Jonas and Priyanka Chopra were seen on a double date with Joe Jonas and Sophie Turner earlier this week at a restaurant in London. Along with them, Priyanka's mom Madhu Chopra, brother Siddharth Chopra and Nick's youngest brother Franklin Jonas also joined the dinner at Covent Garden. Priyanka and Nick walked hand-in-hand when they arrived at the restaurant. She wore black trousers paired up with a matching tailored coat and yellow top. Nick kept it dapper in all black outfit teamed up with a jacket.

On Sunday night, Nick and Priyanka were spotted again and this time with Joe and Sophie. They were seen involved in a conversation during their double date night.

Meanwhile, Priyanka Chopra and Nick Jonas will reportedly head to their honeymoon to Switzerland. As per reports, they will also throw a party for their Hollywood celebrity friends.

Also Read: Priyanka Chopra is swept off her feet by hubby Nick Jonas in this lovely dovey wedding photo