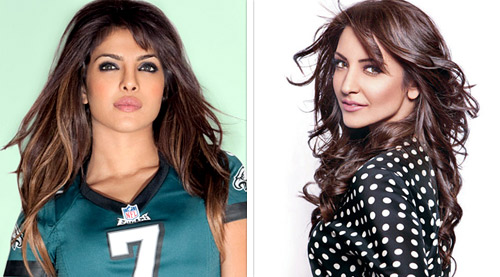 Normally we hear of two actresses giving each other the cold shoulder and hot recriminations whenever they happen to work together.


But Priyanka Chopra and Anushka Sharma who are together in Zoya Akhtar's Dil Dhadakne Do got along like a house on fire...or should we say, like a ship on cruise? As it was during the lengthy shooting on a ship that the two bonded.


So much so that when Priyanka Chopra spotted Anushka Sharma in a bit of trouble on the Mumbai airport recently, she rushed to the younger actress' rescue.


Says a source from Priyanka's team, "This happened when both of them were returning from the shooting of Zoya's film. At the Mumbai airport Anushka found herself surrounded by a restless group of fans. The Mary Kom in Priyanka's personality came rushing out. She immediately extricated Anushkha from the sticky spot."


The source says the two actresses have a lot in common. "Both Priyanka and Anushka are very spontaneous and honest human beings. They've a lot to talk about. Between shots we'd always see them huddled in whispering conversation."