Atal Bihari Vajpayee, who was Prime Minister of India three times, has passed away. The announcement of the passing of the former PM and BJP patriarch was made by All India Institute of Medical Sciences or AIIMS. The politician was 93-years-old and was being treated at the AIIMS since June this year. With the passing of the beloved former PM, B-town celebrities took to their social media to offer condolence. 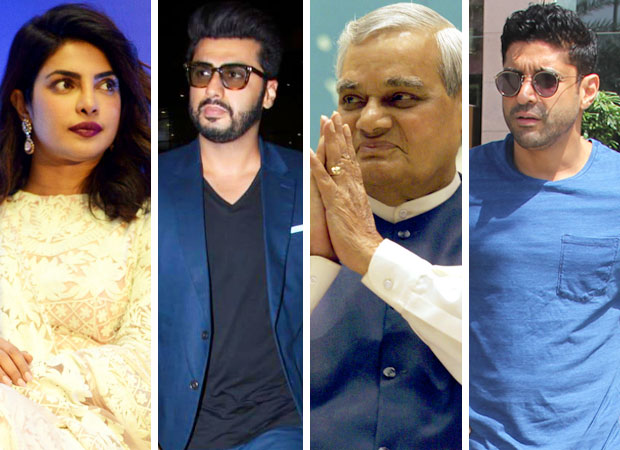 Priyanka Chopra, Farhan Akhtar, Arjun Kapoor, Esha Gupta, Ayushmann Khurrana and many more praised the former PM for his wisdom and the great work he left behind.

Former Prime Minister Shri #AtalBihariVajpayee's visionary ideas and contributions for India were truly remarkable. The nation will always remember... #RIP
My thoughts and condolences to the family.

Indeed a big loss for our country as we pay our last tribute to #AtalBihariVajpayee ji. He was a close family friend and his legacy will forever be remembered. Thank you for your selfless service, sir! My heartfelt condolence to everyone.

One of the few statesman who brought dignity and esteem to politics. His dream and steadfast application of Road connectivity changed and continues to change millions of lives in our country. Bowing with respect to our beloved leader #AtalBihariVajpayee ji.

A true legend, respected statesman, phenomenal poet, tall leader beyond stature, respected by even his strongest critics and rivals...#Atalji passes on. Leaving behind a legacy of greatness that will inspire generations forever! #AtalBihariVajpayee pic.twitter.com/JewgmAKQjl

Today we lost a great statesman, poet and orator. A man who dreamed of a glorious nation and strived to take us on the path to prosperity. Rest in Peace #AtalBihariVajpayee ji. pic.twitter.com/nOqeCg7FJW

RIP #AtalBihariVaajpayeeJi .. you will be remembered as one of India’s greatest leaders, as an exemplary statesman, as a tour de force for peace and unity and most of all as a genuine, warm, approachable human being.

Heartfelt condolences to #AtalBihariVajpayee ji's family and dear ones. May his soul rest in peace. ????

“Let no one challenge India's secularism.” - Atal Bihari Vajpayee #Salute #Respect
Growing up in India in the 1980’s and 90’s one can never forget what a deep impact #AtalBihariVaajpayee ji made on us... he was a great statesman and leader. #RIP

India has lost the most Loveable & Charismatic leader #AtalBihariVajpayee ji, He will always be remembered for his contribution in the Freedom struggle, the way he handled Kargil war & Courageous Pokhran tests. His remarkable poetries will inspire generations to come.#OmShanti pic.twitter.com/XPElxtiejX

A Titan has departed. There was more impact and gravitas in the pauses between his words, than there are in the petty political speeches we hear these days. #AtalBihariVaajpayee

Whether you agreed with him or not, you couldn't help but respect the sheer statesmanship, wisdom and eloquence of the man. RIP #AtalBihariVajpayee

It is rare to find love and respect across the entire politcal spectrum.

Atalji, was the rarest of them all.

He was a rare statesman. #RIPAtalBihariVajpayee ????

Across party and ideological lines there’s an outpouring of genuine sadness at the passing of Atalji.

A tribute to not just a truly great politician, but in fact a ‘statesman’

A term most fitting to describe one of independent India’s tallest leaders.#ripAtalBihariVajpayee pic.twitter.com/cnTK259HRK