It was one helluva rush hour at Priyanka Chopra and Nick Jonas’ wedding reception on Tuesday in New Delhi. The guest included several political bigwigs. However the big news was that the Prime Minister Shri Narendra Modi took time off from his busy schedule to attend the celebration. 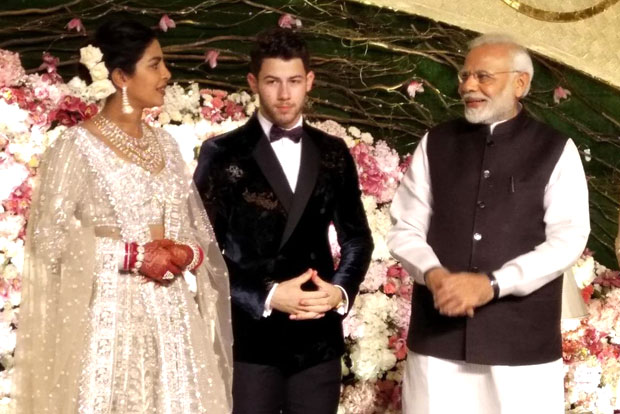 No wonder Priyanka wore Indian clothes for the reception. Priyanka has had official meetings with the Prime Minister on at least two occasions in recent times. During one of these, a controversy had erupted over her dress code when she was photographed chatting with Shri Modi in a leg-revealing dress.

Many of the PM’s supporters found Priyanka’s attire improper for the solemn occasion. The incident is now in the past as Modiji paid a flash visit to the wedding reception in a Delhi hotel to give his blessings to the newly married couple. The Prime Minister was seen chatting warmly with the married couple.

This is where Priyanka scores bonus points over Deepika. They both had a double wedding each (Priyanka-Nick’s Catholic wedding was conducted by Nick’s father who is a qualified priest) within weeks from one another. Neither wedding was attended by A-listers from Bollywood.

Incidentally, a second wedding reception is planned for Nick and Priyanka later this month in Mumbai where the who’s-who of film land will show up.