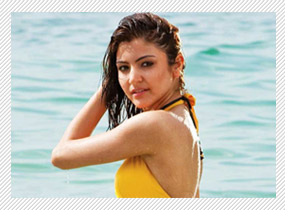 Being in Badmaash Company

On its release, Badmaash Company took a good start and went on to be a profitable venture at the box office. Of course it did a little less than half of Rab Ne Bana Di Jodi business but given the cost of the film, it was still a win-win situation for all involved. Also, for Anushka the film was a good means to showcase her body beautiful as well, what with a bikini top ensuring that for audience she was no more just the 'behenji' types, something that threatened the young actress after Rab Ne Bana Di Jodi.

As an actress the film was obviously not as challenging as the debut affair but given the 'masti' and 'maza' mode that she wanted to step into after a heavy-duty beginning, Badmaash Company managed to keep things light for her. In the process a new facet of Anushka's personality as well as acting talent was also explored, hence ensuring that industry had continued confidence in her.

It's time to bring on the talent

While Rab Ne Bana Di Jodi brought with it some good stardom while Badmaash Company got her into 'masti-n-mazaa' mode, the film that made everyone stand up and notice the immense talent that Anushka carries was Band Baaja Baaraat. Just like Rab Ne Bana Di Jodi, even this time around there were no fancy sets, no overseas shoot and no glamour quotient in the proceedings. There was one factor that was of utmost importance here - 'the script'. It was this power of script that made sure that Band Baaja Baaraat didn't just becomes the surprise success of the season but also joined the likes of Jab We Met when it comes to 'desi cult romcom' outings.

To think of it, the film had a few things going against it. The hero here was an absolute newcomer and didn't come with conventional 'hero-like' looks. Of course this unconventional man is today known as Ranveer Singh but two year ago one had huge apprehensions around him. This is where the film turned out to be Anushka's own as it was sold entirely on her name. She was the only recognizable name in the entire enterprise with even the director as a first timer. However Anushka chewed on her part of Shruti Kakkar, and how! As a Delhi girl, she gave an impression of being a quintessential Punjabi despite the fact that she has no connection to Punjabis and actually hails from Bangalore!

The film expectedly started slow at the box office but such fabulous was the word of mouth that it went on to earn good moolah at the box office for 6-7 weeks in succession. In fact despite the release of Tees Maar Khan a couple of weeks after its arrival, Band Baaja Baaraat hung on and went on to regale audience well into January 2011 as well. Theatrically the film did good business while on home video and satellite, it is now enjoying as many repeat watch as the likes of Jab We Met. What also worked in the favour of Anushka is the fact that today Band Baaja Baaraat stays on to be her most adored film ever. A definite progression for her!

After a great run up to scoring a hat trick of successes, law of averages awaited Anushka Sharma with the arrival of Patiala House. This film with Akshay Kumar in lead was delayed for a while but even as it eventually hit the screens, there wasn't much magic created at the box office. This incidentally was Anushka's first film outside Yash Raj but turned out to be a commercial failure, hence breaking the winning spree for her.

A film which was basically centered on Akshay and didn't really have much to do for Anushka, it still allowed the young woman to perk up the proceedings whenever she appeared on screen. She basically played an extension of what she had done in her earlier films and audience didn't mind that either because otherwise the drama here was more on a serious side. The film worked for Anushka to an extent that she still saw good reviews coming her way for her spirited performance. This isn't all as there were also some quintessential Bollywood song and dance routines that Anushka helped herself with this film.

Even though the film didn't do well in theatres, Anushka benefited from working with Akshay Kumar as it added another superstar to her name after Shahrukh Khan. Though she still needs to add more Khans and other superstars to her repertoire, it was still a start being made.

Please visit this space for Part 3 of the Feature