Zee TV’s top-rated show, Kundali Bhagya, has offered several interesting twists to its viewers since its inception. The constant chaos and commotion in Karan (Dheeraj Dhoopar) and Preeta’s (Shraddha Arya) lives has surely kept the audience at the edge of their seats over the past few months. In fact, the recent two-year leap truly turned the tale on its head with Karan and Preeta separating. Since then, viewers have watched how Prithvi (Sanjay Gagnani) has taken control of the Luthra Mansion and Preeta has returned to save the family.

Known for gripping plot twists, the latest track of Kundali Bhagya will see some high voltage drama during the Luthra family's Lohri celebrations. While shooting this sequence, everyone was eager to have a good time, and they definitely had a reason to be this excited as they got a chance to dress up in their finest traditional outfits. What's more is that Dheeraj got a chance to experiment with his look and he took up a turban-clad, Sardar avatar for the party. Ever since pictures of Dheeraj's new look surfaced on social media, everyone has been raving about it. In fact, getting into this new look and celebrating Lohri, also made him nostalgic about his family celebrations

Talking about his look Dheeraj said “Different roles demand a different kind of preparations, and I attempt to do it quite earnestly. For an actor, it’s more of a physical preparation when it comes to a sequence like Lohri. I mean, culturally you know I belong to Delhi and a Punjabi family. Lohri is a very prominent festival in northern India. I have many good childhood memories associated with the festival. I always cherish, meeting all the family members and dressing up in colourful traditional attire; dance and sing around the bonfire.” 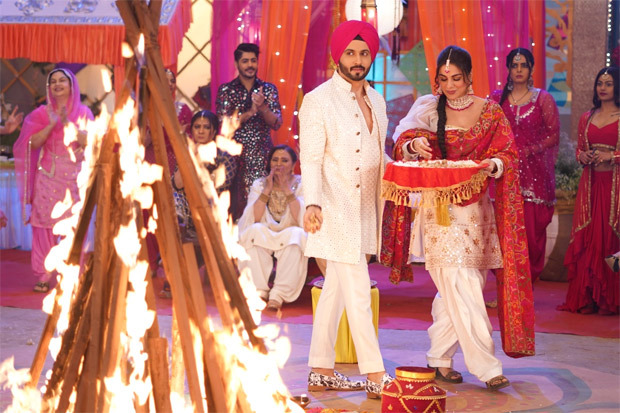 He further added “I have experimented with multiple looks with a countless number of costumes and dressing up as a Sardar feels special.  There’s always a plan of action as an actor and it’s my job to give my 101% to every character, be it any look. I am always excited for new challenges and this fresh avatar was a welcome change. The fun part of acting is you get to play a completely different person each time."