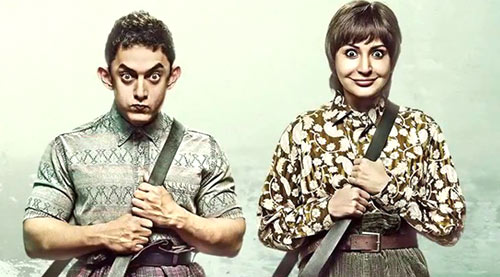 For some mysterious reason, the biggest hits of every year in Hindi cinema have almost always come in the second half of the year, with some prominent

However, December, the month of birthdays for so many top male stars, has also been the month, especially in recent times, that saw game-changers that were also the biggest

box-office performers, and in 2014, PK's global success has been the latest twist in this tale. Here is a look at the prominent December releases that changed the game.

This film was actually released on December 31! Inspired from the 1967 Ram Aur Shyam but with a lighter take, this Salim-Javed co-written romantic comedy ushered in the

double role epidemic in the '70s like nothing else. Hema Malini, the Seeta and Geeta of the film, not only established her supremacy over reigning queen Mumtaz in the

heroine hierarchy but herself went on to do multiple dual roles all the way till the '80s.

Sholay, with the same lead artistes heading the ensemble cast.

The most successful of the many Hindi adaptations of The Godfather, Vidhaata consolidated the resurgence of Dilip Kumar after Kranti and Shakti and made

sadly, also branded the redoubtable Sanjeev Kumar as a character artiste. It was also the only blockbuster in the first part of Sanjay Dutt's chequered career and got him a lot of

films till his drug addiction led to a crisis.

And Vidhaata was that one film that catapulted Subhash Ghai into the front ranks, which even Kalicharan and Karz could not do earlier.

Hero set the trend for intense romances against the backdrop of crime, followed later in films like Tezaab, Phool Aur Kaante, Deewana and more. Manhar, the playback

singer whose voice resembled Mukesh and had been around since 1969, got his true breakthrough (Mukesh's absence also helped), as both the chartbusting success of the songs and

Jackie Shroff's and composers Laxmikant-Pyarelal's support led to the most fruitful phase of his career.

This was the blockbuster that established Subhash Ghai's Mukta Arts as a premium banner. The song 'Lambi judaai' was also one of the earliest harbingers of the Sufi trend, and

with its enduring popularity till date, can be said to remain a trendsetter for the current endemic Sufi overdrive.

Jackie, of course, became the first to prove that models could transform into skilled actors. And Meenakshi Seshadri became yet another South import to form the reigning trio (with

Jaya Prada and Sridevi) at the top in the hallowed traditions of Vyjayanthimala, Waheeda Rehman, Hema Malini and Rekha.

This was almost a Bobby re-dux but was a game-changer as it conclusively proved that even in the '80s movies with more than eight songs could be winning propositions. Salman

Khan, of course, became the Salman Khan with this film, released on the penultimate Friday of 1989, upsetting Ram Lakhan's apple-cart as the biggest hit of '89.

The songs by Raamlaxman (who was struggling for 13 years!) were a rage, picking up 13 (one per year of struggle?) big and small awards, and S.P. Balasubramaniam became a hit in

Hindi cinema for some years, because for the first time he was cleanly associated with a young Mumbai hero rather than a Kamal Haasan or Rajnikanth. And while Asad Bhopali made a

short-term comeback (he passed away less than a year later), fellow lyricist Dev Kohli became a big name for almost a decade - after a 14-year struggle.

Alok Nath, Reema Lagoo and Laxmikant Berde got major professional boosts, while Mohnish Bahl, who had struggled as a hero, earned a new lease of life as an in-demand villain.

Last but not the least, the film consolidated yet again the musical love story genre with two debutants (Salman had only done a secondary role in Biwi Ho To Aisi before) and

made Sooraj the high-priest of romantic family dramas even before his Hum Aapke Hain Koun! ...

Forget for a while the wonders it did for Sanjay Dutt as a comic toughie, Arshad Warsi and Boman Irani professionally - this was the film that turned the Hindi movie box-office formula

on its head. So dim was the 'commercial' view of India's first (and so far only) 'medical comedy' that the film was released by producer Vinod Chopra on a gamble, and to him goes the

The success of the film stunned the trade - especially when it bettered the ROI ratio of a far-costlier film that also topped the year - Koi...Mil Gaya, and proved that neither Hirani

nor this feat were about luck: after all, even Koi...Mil Gaya fell in a hitherto fresh genre. Conclusion: Audiences had tasted the pleasures of freshness.

In the last few years, however, it is Aamir Khan who has clinched

the December slot, so to speak.

Murugadoss' South original, it rekindled interest in South movies, which was last witnessed in the Anil Kapoor era of the '90s and the Mithun Chakraborty B-grader remakes of the last

part of that decade.

3 Idiots (2009) showed that Hirani's graph was still on the ascent. Taking a leaf out of a Chetan Bhagat book, he expanded the theme and story further to create a classic

for all time, and showed that a pan-Indian, pan-genre audience could make a film cross the 200-crore domestic mark, do a Golden Jubilee (run for 50 weeks) at the same time and

remain forever in our hearts.

Dhoom 3 (2013) was said to be the first 300-crore-plus grosser. It proved what deft marketing and great infrastructure at the distribution and exhibitor level could do

commercially for a film that was a lethal combination of stylized content and production values, the right emotions and a superstar with a big-ticket heroine. 30 years after Hero,

the film also rejuvenated the career of Jackie Shroff, now as a character artiste.

Finally, with PK (2014) set to smash the Kick record, with a theme that coincidentally incorporates an element from Hirani's Munna Bhai MBBS competitor

Koi...Mil Gaya - that of the alien, we know that the big-cast wholesome entertainer with a message can effortlessly win over both the brainless masala entertainers and the small

films with high content. It shows, with full impact, how a single brilliantly-conceived film can break all demographic barriers, that too, when laughing at its Indian viewers - worldwide -

for their inherent contradictions!