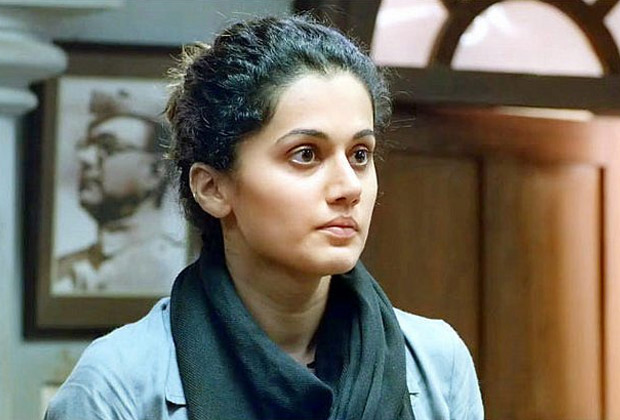 Between 2013 and 2016, she was seen in only three Hindi films. Now it is going to be a complete turnaround for Taapsee Pannu as the Punjabi girl would be seen in as many as five Hindi films in 2017.

"These are Tadka, Makhna, Naam Shabana, Running Shaadi.com and Ghazi. Actually, make it six since Ghazi is a Hindi-Telugu bilingual," informs our source.

It isn't the Pink effect that has suddenly made her seem busier than ever before. As a matter of fact she had signed all these films before the release of Pink and regardless of their fate, she would still have been busy making them all.

"Pink changes the equation though for her," an insider adds, "She started with a good success in Chashme Baddoor [2013] and followed it up with Baby [2015]. From a comic actor to being an action lady, she made a switchover seamlessly. Then she dared to experiment and stepped into a realistic Pink which has a docudrama set up to it. She is definitely not following the conventional route and that is working for her. Especially after Pink, she is being looked at as an actor of substance."

While that should keep the flag high for Taapsee in a film like Naam Shabana which is a prequel to Baby, she is happy to let her hair down in light hearted affairs as well.

"Tadka is a slice of life affair which has Ali Fazal as her co-star and Prakash Raj making his debut as a director. The film also stars Nana Patekar and Shriya Saran. On the other hand Makhna is a quintessential Bollywood commercial music entertainer where she is paired opposite her 'Tum Ho Toh Lagta Hai' music video co-star Saqib Saleem," the source adds.

Ghazi is an action drama which tells the story of a submarine caught in a war zone. Based on real life instances, it has Taapsee alongside Rana Daggubati. The film's shooting is almost through and the makers are contemplating the right release plans for it. On the other hand, Running Shaadi.com is a film that was supposed to release way back in 2014 but has been stuck ever since. Incidentally, the film with Amit Sadh as Taapsee's co-star is again backed by Shoojit Sircar, the man who then roped her in for Pink.

Nonetheless, with five films in her kitty, there is a lot on Taapsee's plate that would be up for grabs right through 2017. Doesn't she feel it would end up being an overdose for the audience, considering the fact that a film or two down South may be happening too?

"Well, I have waited for so long. Now when it is time for all these films to arrive, I am definitely not complaining," smiles Taapsee, "Yes, I didn't do too many Hindi films in last three years since I don't have any filmy background. One mistake and I would have been out. There has been no Godfather either for me and hence the pace was slow. However, things started changing after Baby and I bagged all these interesting films. 2017 should be fun."