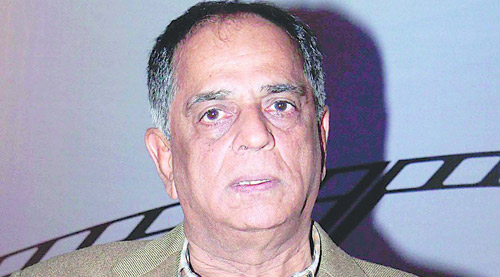 Hours after his sudden appointment, Pahlaj Nihalani, the newly-appointed Chairperson of the Censor Board Of Film Certification (CBFC) is still to come to terms

with his new designation. He shares his thoughts with Subhash K. Jha

How did you react to the news of taking over from Mrs. Leela Samson?
It came as a complete surprise to me. I had no clue I was being considered for the job. I have been busy with the wedding and reception of Shatruji's son. They're like family to me. So,

when the news came, I couldn't really follow it up. I heard about the appointment through the media. Initially, I had no official intimation from the Ministry of Information &

Broadcasting. I finally got a call on Tuesday morning.

The job comes with a lot of controversy, what with Mrs. Leela Samson's abrupt resignation hovering over your head?
But wasn't her tenure over? I wouldn't like to comment on her conduct. As far as I am concerned, I've never shunned challenges. What is life without challenges? I've always worked for

the welfare of the film industry. I see my new responsibility as the CBFC's chairperson as an extension of the work that I was always doing.

It seems like a thankless job?
I don't see the job as being as difficult as it is made out to be. I have my differences regarding a lot of these so-called difficulties that have been put forward by the earlier members of

Do you think the position of the CBFC's Chairperson has been politicized?
If you ask me, the Censor Board (during Leela Samson's tenure) didn't do its job the way they should've done. When their tenure was over, then they suddenly woke up to all these

corruption charges. After their tenure was over, the outgoing members of the CBFC seem to have planned a malign campaign against the central government.

Are you saying they lied about political intervention?

What were they doing during all these years? Why didn't they step down in protest against the supposed corruption when they were still in power? By raising a hue and cry when they

In your opinion, what should the earlier Chairperson done?
Nothing was done to bridge the gap between the film industry and the Censor Board in their perception of how far censorship must go, and why.

is free of undesirable values. If, both, cinema and the censor board are supposed to uphold the same values, then why should they be at loggerheads?

There have been a lot of corruption charges against the CBFC?
I don't think there was any corruption in the CBFC. I am a producer. I was never demanded any money nor asked for a bribe to clear my movies. When I was dissatisfied with some

censorial decisions about my films, I went to the revising committee and my film was cleared.

There are accusations of filmmakers paying to jump the queue to get their censor certificates?
I think it was the middlemen who benefited from these. Accountability is a problem. I, as the Chairperson of the CBFC, will eliminate all the go-betweens that divide the film industry

from the Censor Board. Right now, I am still to find my bearings. Once I settle down in the post, I will take concrete steps to cement relations between the film industry and the Censor

Your closing thoughts?
I don't want to be critical of what the Censor Board did earlier. I want to start on a clean slate and ensure that a healthy and positive relationship exists between the film industry and