The 93rd Academy Awards took place on Sunday, April 25 after much delay due to the pandemic. In top categories, Chloé Zhao became the first woman of colour to ever win the Best Director category for her film Nomadland, Daniel Kaluuya claimed Best Supporting Actor for Judas and the Black Messiah. Youn Yuh Jung of Minari became the first Asian actress to win an Oscar since 1957 and the second in history - she won Best Supporting Actress. Mia Neal and Jamika Wilson, of Ma Rainey's Black Bottom, made history as they became the first Black women to win the Academy Award for Best Makeup & Hairstyling. 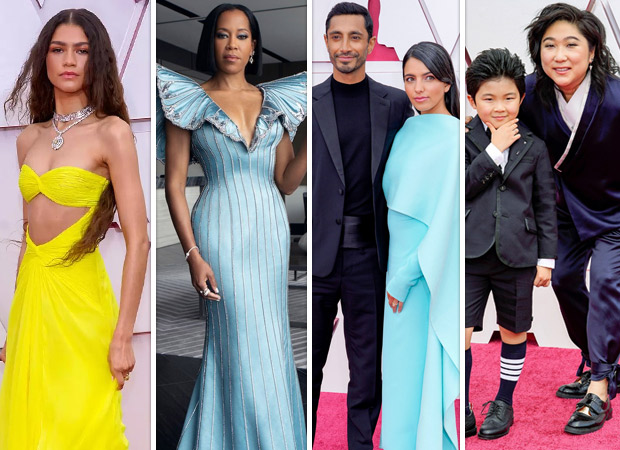 As it was a night to remember with many surprising wins, the awards ceremony took place in Hollywood keeping COVID-19 protocols in check. The red carpet saw some star-studded appearances with great moments and fashion style. We picked some of the best dressed stars of the night who caught our attention and there were plenty of them. 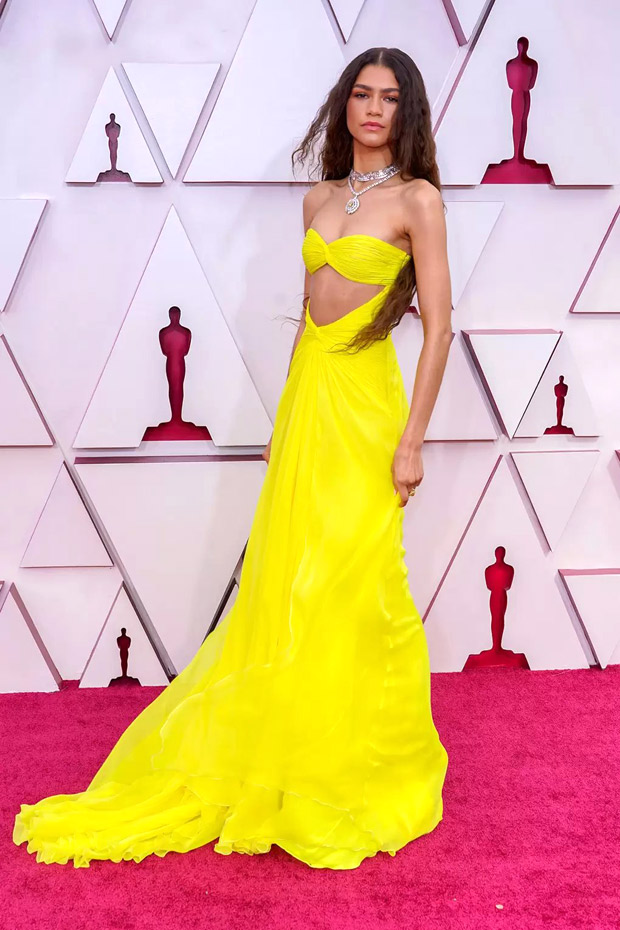 Presenting at the award ceremony was the stunning Zendaya who donned a bright yellow Valentino Haute Couture. It had a deep cut-out at the waist and the dramatic drape making it look like a two-piece. She went with oxidized neck piece to add accessory while keeping her hair in soft curls and glammed up eyes for the red carpet. 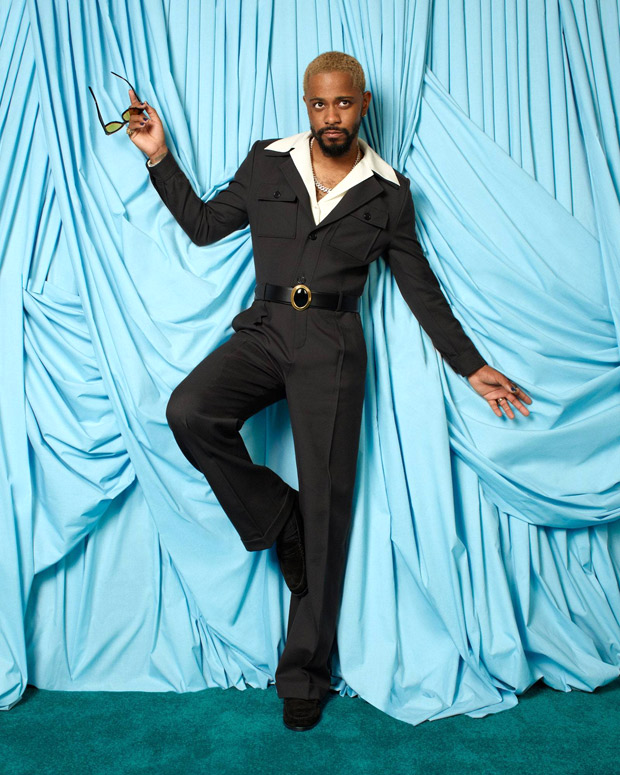 Lakeith Stanfield, nominated for Best Supporting Actor for his performance in Judas and the Black Messiah, made a chic choice and easily one of the best dressed stars. The actor donned a custom Saint Laurent suit piece by Anthony Vaccarello from YSL summer ’21. He teamed the piece with white basic shirt and a belt. 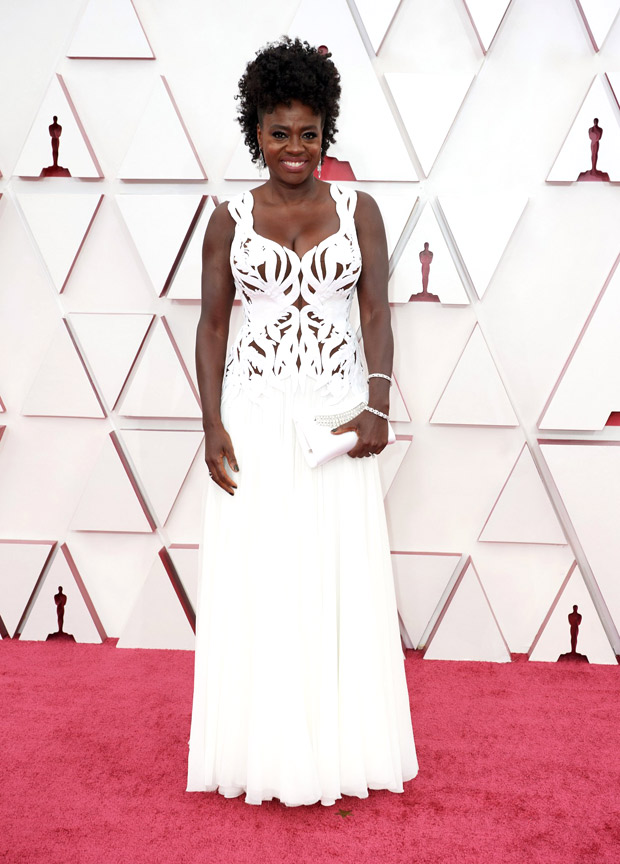 Nominated for Best Actress In a Leading Role for Ma Rainey’s Black Bottom, Viola Davis was wearing a custom-made engineered white thistle embroidered appliqué dress featuring a plunging neckline draped with a circular gathered chiffon skirt. She accessorised her look with just diamond bracelet. She kept her makeup all subtle and hair all open. 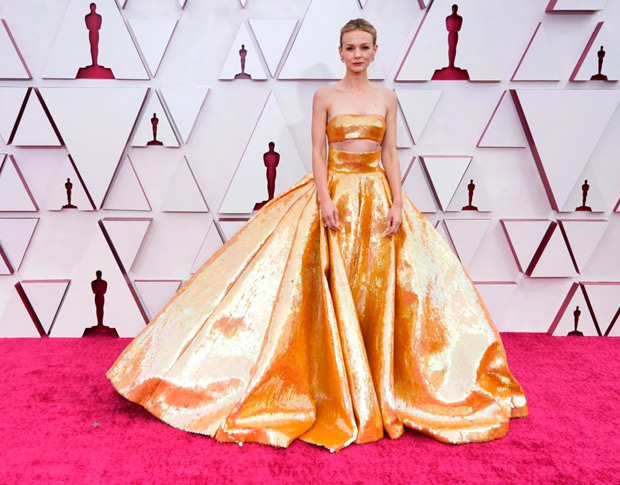 Nominated for Best Actress In a Leading Role for her performance in Promising Young Woman, actress Carey Mulligan impressed us in a Valentino golden shimmery bandeau top which she adorned with matching skirt. She accessorised with High Jewellery ring and earrings set with oval-shaped intense orangey yellow tourmalines. The actress finished her look with nude makeup and hair pulled back in a messy bun. She posed alongside her husband Marcus Mumford who was complimenting her perfectly by wearing all-black suit piece. 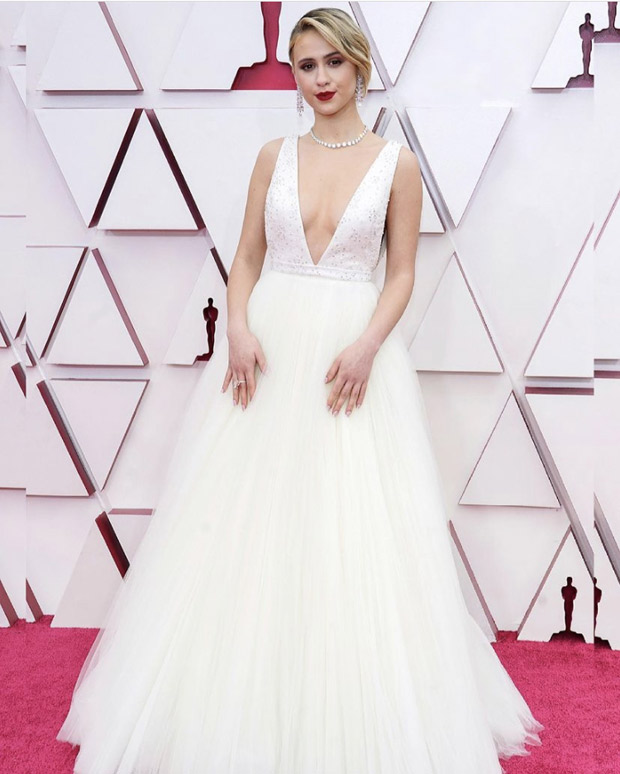 Nominated for Best Actress In a Supporting Role for her performance in Borat Subsequent Moviefilm, the beauty went all glam in Louis Vuitton white gown featuring a deep V neckline with pearl embroidery on it. The actress teamed her attire with Louis Vuitton shoes and accessorised the look with diamond choker set, keeping up with the look she went bold with her lips and soft eyes. 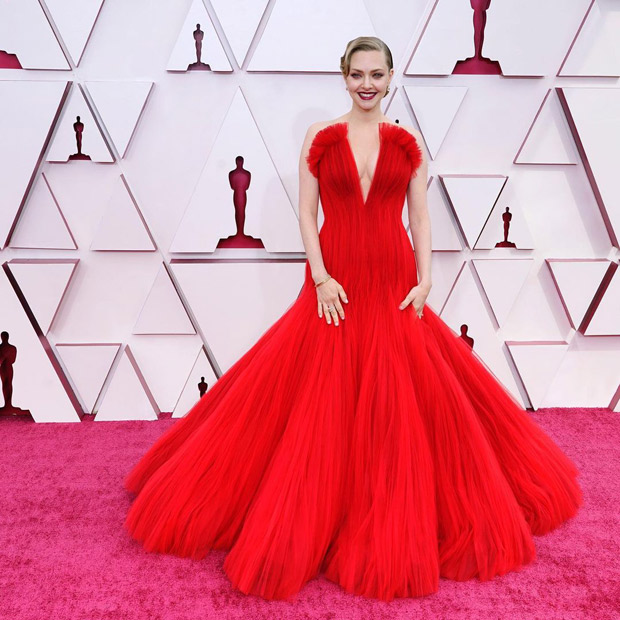 The actress slayed the red carpet in Giorgio Armani Prive strapless gown featuring deep neckline and ruffle design all over it. She went with diamond jewellery by Forevermark including a diamond ring, earrings and a bangles set. 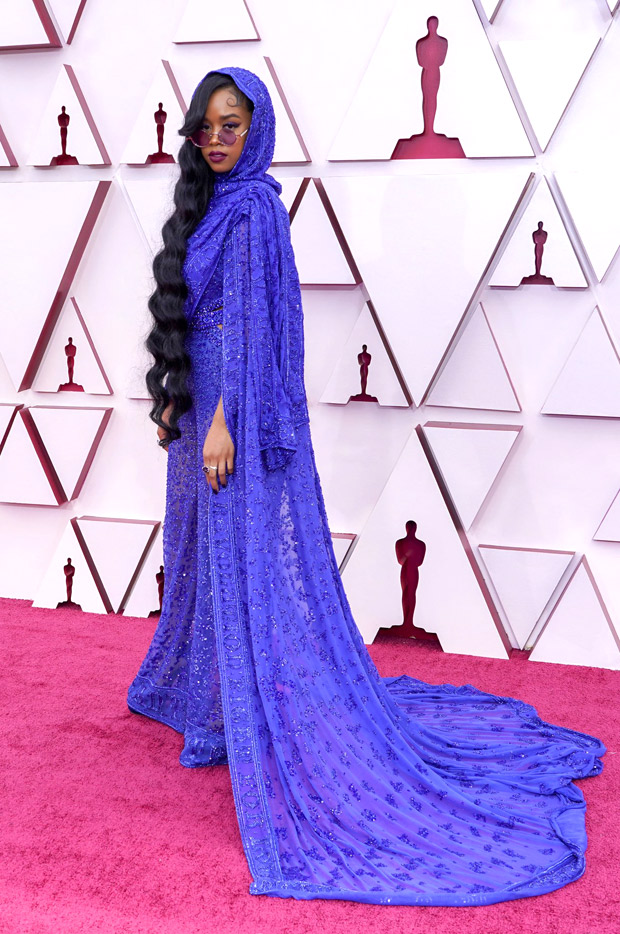 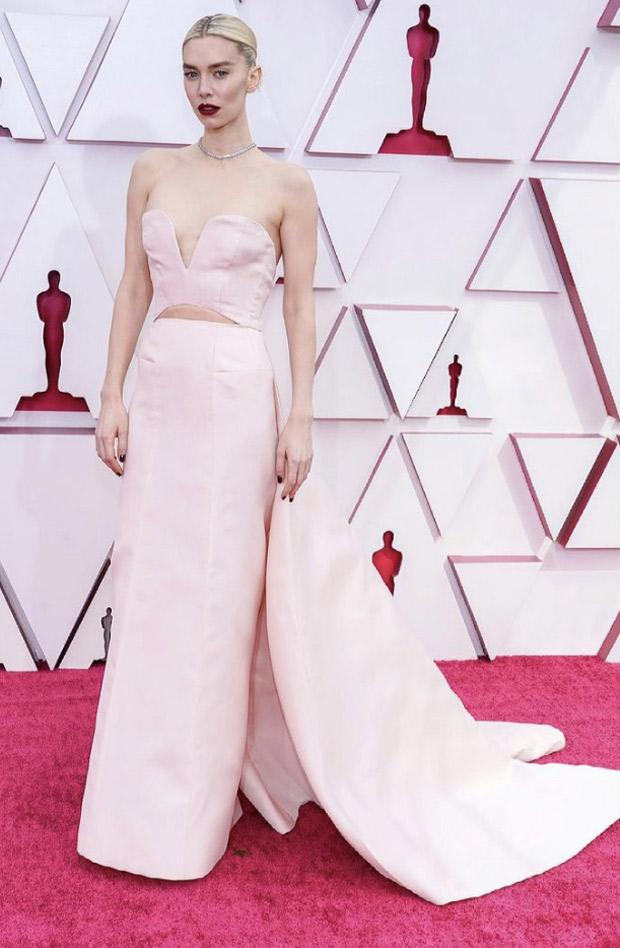 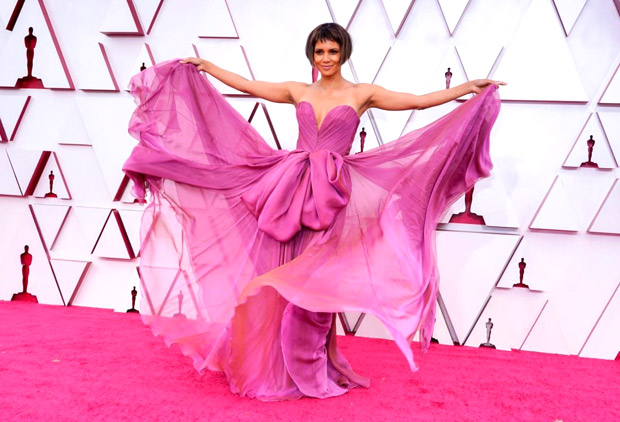 Actress Halle Berry wore a custom magenta LaQuan Smith dress featuring an oversized bow and a plunging neckline the dress had a flowing fabric. The actress went all short with her hair with baby bangs and angled bob. The actress posed alongside her beau Van Hunt. 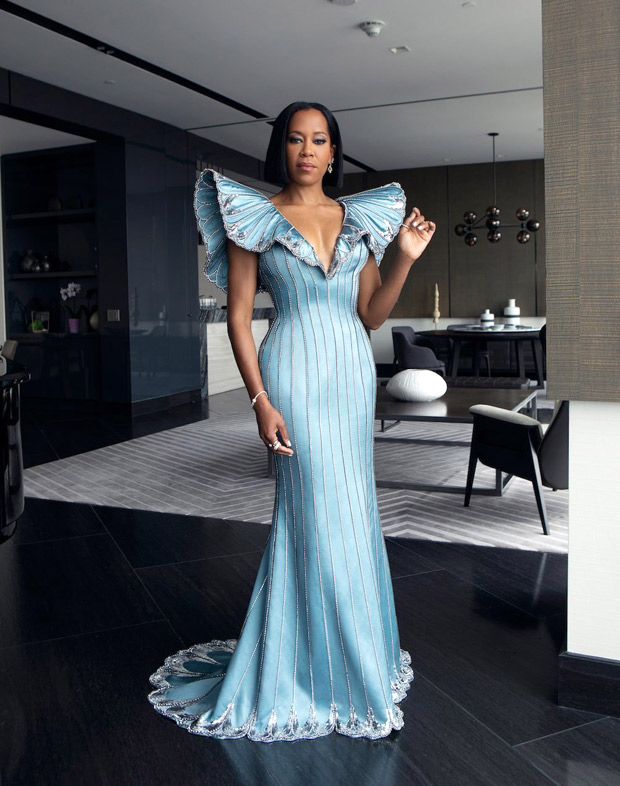 Another presenter was Academy Award winner Regina King who made a statement in custom-made duchess-satin Louis Vuitton gown embroidered with silver sequins and crystals. The star opted for pair of diamond earrings and bracelet from Forevermark Jewelry.  She looked like a complete vision. 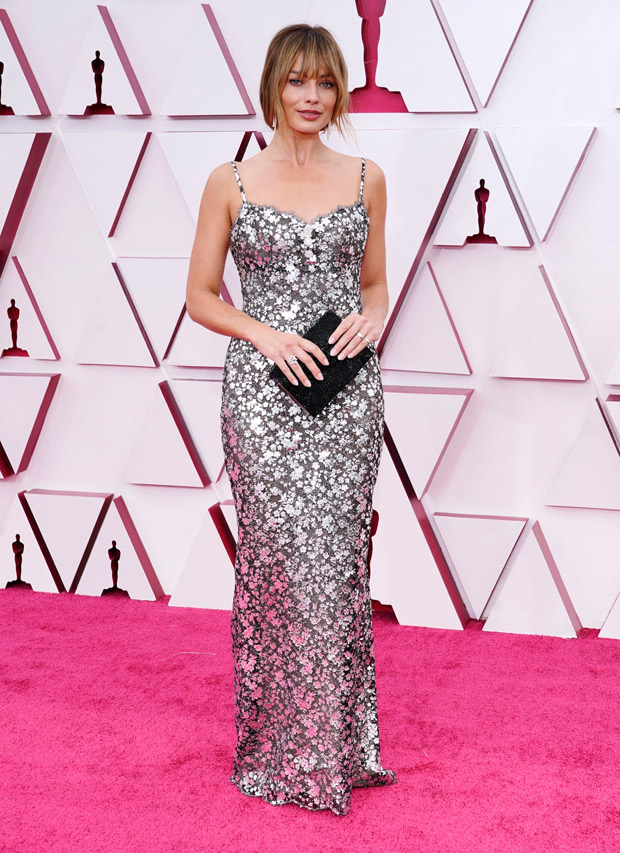 Margot Robbie was seen donning a maxi dress from Chanel. She accesorised her look with black clutch and kept her makeup all subtle with hair tied in a ponytail. 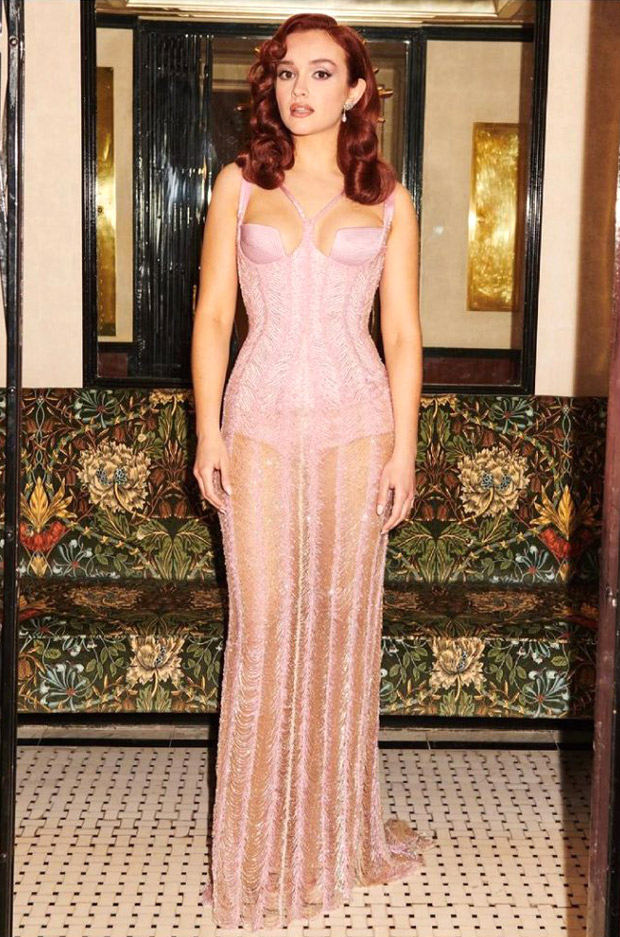 Olivia Cooke couldn’t make it to the Oscars but was very much in attendance all dressed up all the way from London. She looked like a dream in shimmery pink Versace dress. Her sensual dress was entirely covered in diagonal, fringe-effect crystal embroidery. She kept her makeup all soft which was complementing her look well, Her movie The Sound Of Metal was nominated for Best Picture. 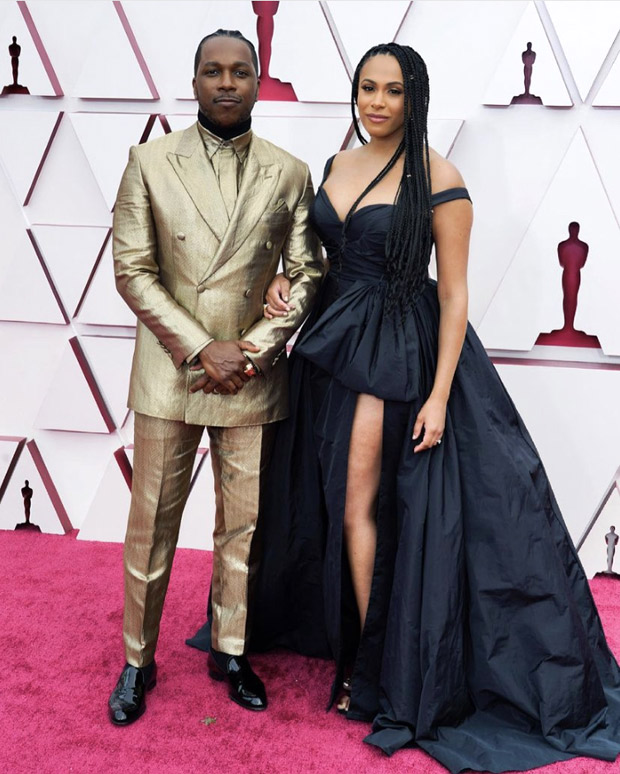 Leslie Odam Jr. opted for all gold from head-to-toe. He donned Brioni double-breasted gold tuxedo with matching shirt with a sartorial artistr. He teamed the look with gold Cartier look as he posed with his wife Nicolette Robinson. The actor was nominated for Best Supporting Actor and Best Original Song for One Night In Miami. 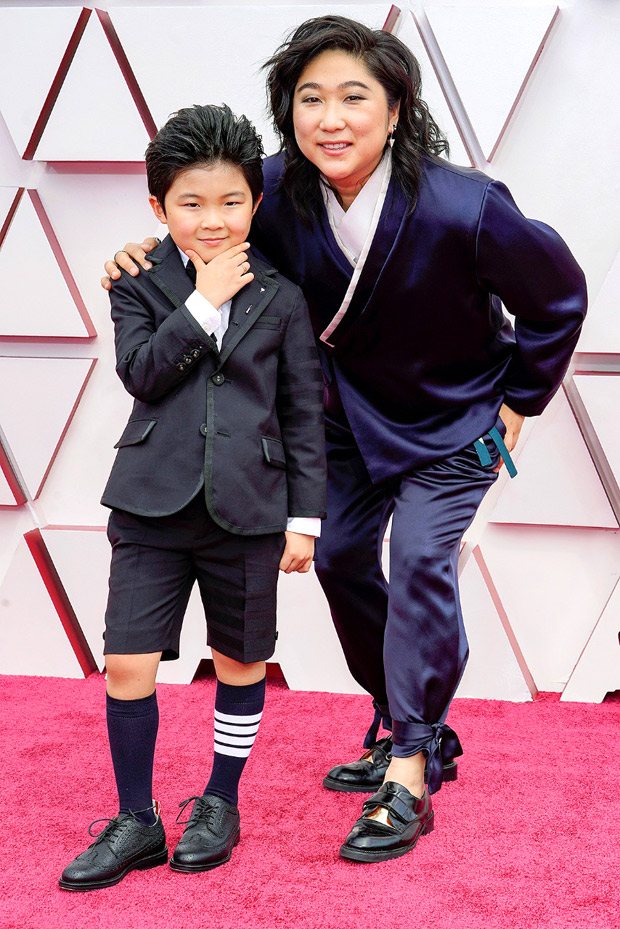 Minari star Alan S.Kim was the star of the night. Ever since he uploaded pictures with his pet dog Cream, everyone awaited for him to arrive at the red carpet. And he stole the show. The 9-year-old star wore custom Thom Browne black tuxedo single breasted jacket with classic backstrap shorts, 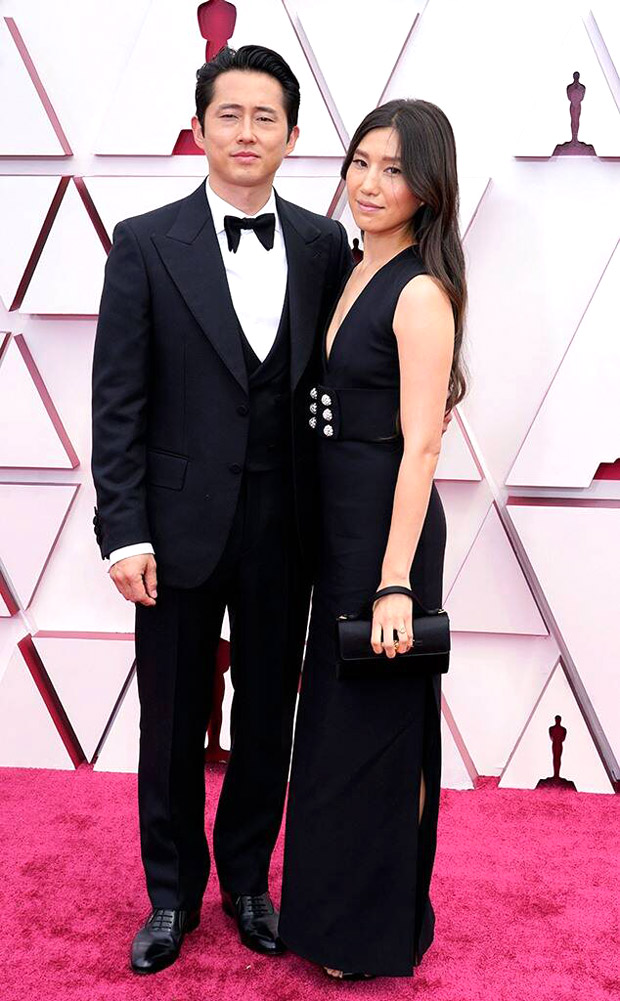 Steven Yeun, who became the first Asian-American actor to be nominated for Best Actor In Leading Role at the Academy Awards, was representing the Minari team. He was seen in custom Gucci three piece suit with a covered placket evening shirt with bib, silk bowtie and leather lace-ups with double G detail. 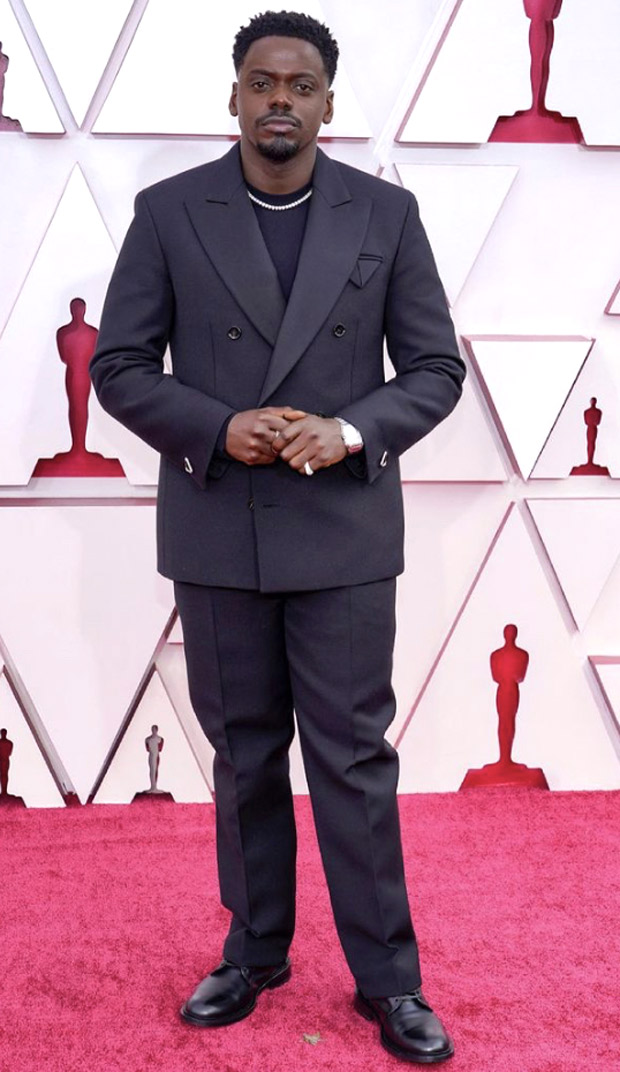 Academy Award winner for Judas and the Black Messiah Daniel Kaluuya set style on to another level in custom Bottega Veneta three piece suit. The actor teamed the look with a pearl choker and a ring. 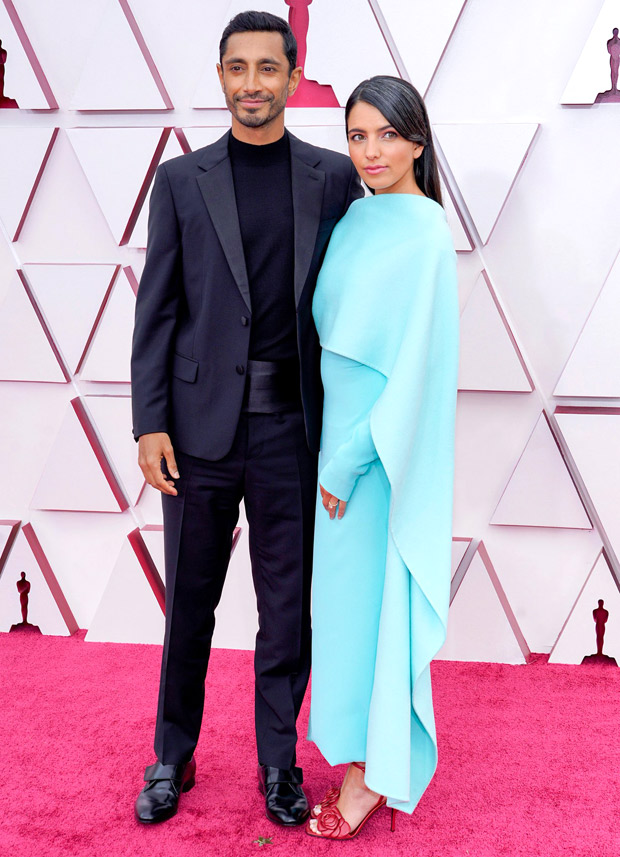 Best Actor In Leading Role nominee and star of the year, Riz Ahmed walked the Oscars red carpet wearing a three-piece Prada suit which he accessorised with a Girard Perregaux watch. He stole many hearts on Sunday night as he posed alongside wife, author Fatima Farheen Mirza and even fixed her hair before the paparazzi took the pictures. Clearly, one of the highlights of the night.