Last Updated 27.11.2021 | 10:59 PM IST
feedback language
follow us on
Bollywood Hungama » News » Bollywood Features News » “One of the most entertaining scenes that I have done” – Rani Mukerji on driving an ATV bike for a comedy scene in Bunty Aur Babli 2

Rani Mukerji is one of the best actors ever produced by Indian cinema. There is no role that she can’t convincingly perform and there is no genre that she can’t dabble in. Rani will be seen in the out-and-out comedy, Yash Raj Films’ Bunty Aur Babli 2, which releases on November 19. She is reprising the role of Vimmy in this rib-tickling family entertainer that promises to leave everyone in splits. 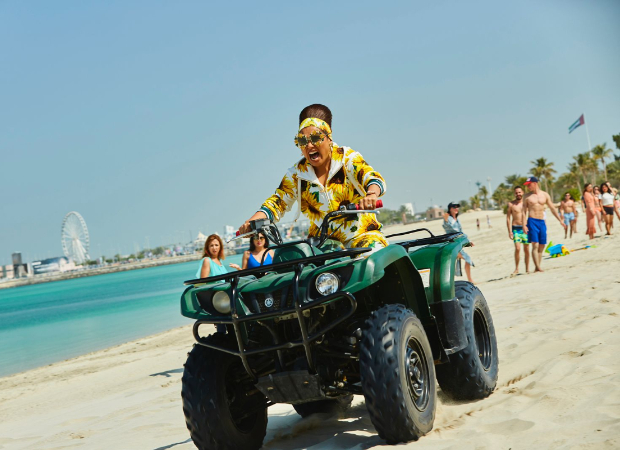 In one crazily funny scene in Bunty Aur Babli 2, Rani will be seen driving an ATV bike in Abu Dhabi which will surely make people roar with laughter. She reveals, "I think the ATV scene in the film, that is there in the trailer, is one of the most entertaining scenes that I have done and I’m sure that the audiences will also have a fun time watching that sequence."

Rani adds," The point at which the scene comes in the film, is a time when Vimmy as a character is trying to do something out of the ordinary, as in she has taken, her anger to another comic level, so that scene is one that I have enjoyed doing because it has action & comedy, it was the closest that I could come to a comedy action film, that one scene alone and the way we have shot it in Abu Dhabi, is very very special."

She further adds, "Also I don’t know why I wanted to do the stunt myself, probably I was enjoying riding the ATV bike so much that I decided to do it which I was obviously advised not to, but I decided to do it anyway and I did end up injuring myself, but I guess there is no gain without pain and when I see the scene today, I’m just so glad that I did it the way I did."

Yash Raj Films’ Bunty Aur Babli 2, which releases on November 19, is an out-and-out comedy that will pit two sets of con-artists called Bunty and Babli, from different generations, against each other! Saif Ali Khan and Rani Mukerji play the OG Bunty Babli while Gully Boy hunk Siddhant Chaturvedi and the gorgeous debutant Sharvari, play the new Bunty Babli. It has been directed by Varun V. Sharma.