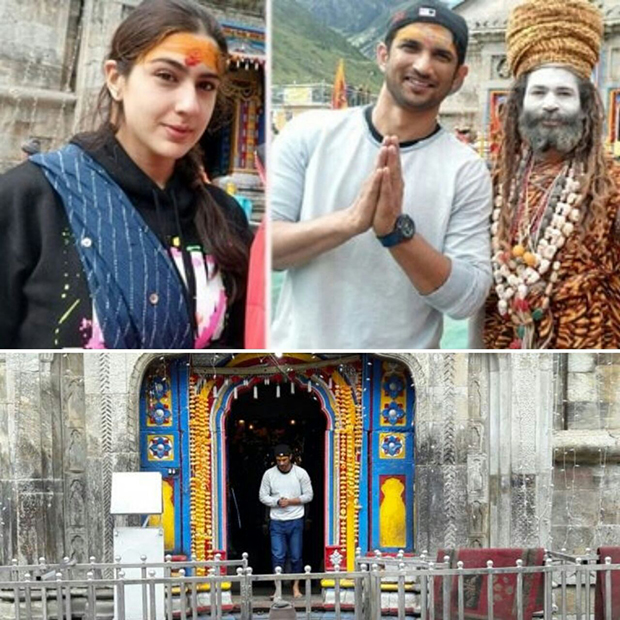 It’s always considered to visit a place of worship before starting a new venture. For the team of Kedarnath, it is obvious that they would visit the namesake temple, located high in the hills of Uttarakhand. And as expected, the actors of the film – Sushant Singh Rajput and Sara Ali Khan – did pay a visit to the holy shrine before their film goes on floors on September 3.

A collage picture has emerged that shows both Sushant Singh Rajput and Sara Ali Khan looking content after seeking the blessings. Their heads are smeared with vermillion and the ‘tikka’. Sushant looks really happy and is seen posing with a sadhu, who also is giving a nice pose and smile for the shutterbugs. The third picture in the collage is taken from a distance and shows Sushant Singh Rajput exiting from the Kedarnath temple.

Incidentally, this is the second visit of Sara Ali Khan in two months. She visited earlier with director Abhishek Kapoor when the film was launched in June 2017. This is her debut film and it remains to be seen whether the daughter of Saif Ali Khan and Amrita Singh also manages to excel like her parents.

Kedarnath is a joint production between Balaji Motion Pictures, T-Series and KriArj Entertainment. It is expected to release next year.