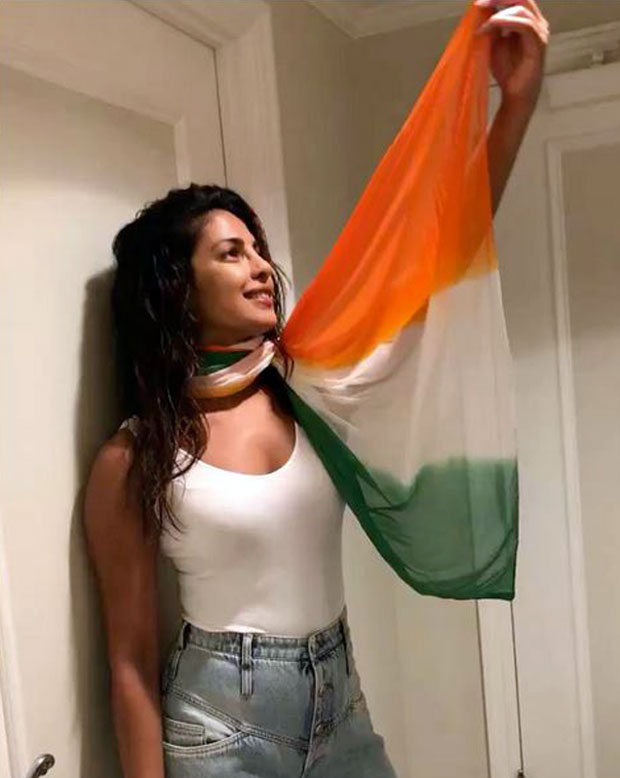 With many actors taking to social media to share their wishes as they rejoice 70 years of freedom, it seems that Priyanka Chopra was at the receiving end for doing the same due to a boomerang video. The former beauty queen shared a boomerang video of hers; dressed in a tee, a pair of denims and an Indian tricolor scarf that adds the Independence Day vibe in this video.

Talking about the same, since Priyanka Chopra is missing all the Independence Day celebration due to her abroad commitments, the actress decided to post her sentiments on her Instagram page saying, “Independence Day #Vibes ????#MyHeartBelongsToIndia #happyindependencedayindia #jaihind” along with the boomerang video. But what followed was a massive outrage on the social media as she started receiving flak from many for not wearing a saree or a salwar-kameez [basically a traditional Indian outfit] during this occasion. Further she also received several hate posts for using a tricolor dupatta.

From being termed ‘Anti-National’ for using a tricolor dupatta/ scarf to being insulted for not wearing the ‘quintessential’ Indian dress, Priyanka Chopra received several such humiliating comments on her video comments section. While some of them expressed their disappointment over her gesture terming her as an ‘American’ citizen and asking her to not return to India, some other fans came in support of the actress wherein they maintained that no one should comment on a woman’s attire since it is a choice made by the person.

Although the war continues on social media, Priyanka Chopra is yet to respond to these comments.

This is not the first time where the actress has been at the receiving end of a social media wrath as she has previously been dragged into a controversy for wearing a knee length outfit whilst her meeting with Honorable Prime Minister Narendra Modi. She was once again criticized for her attire which was termed to be ‘indecent’ and ‘disrespectful’.