Rishi Kapoor, who likes to speak his heart out on social media, had taken to the platform to share an announcement about his health. He had told his followers that he is flying to New York City for a specific treatment but didn’t divulge any further details. Since then, fans and well-wishers have been flooding the platform with messages of concern until recently when they received an assurance that the veteran actor is on a recouping stage. 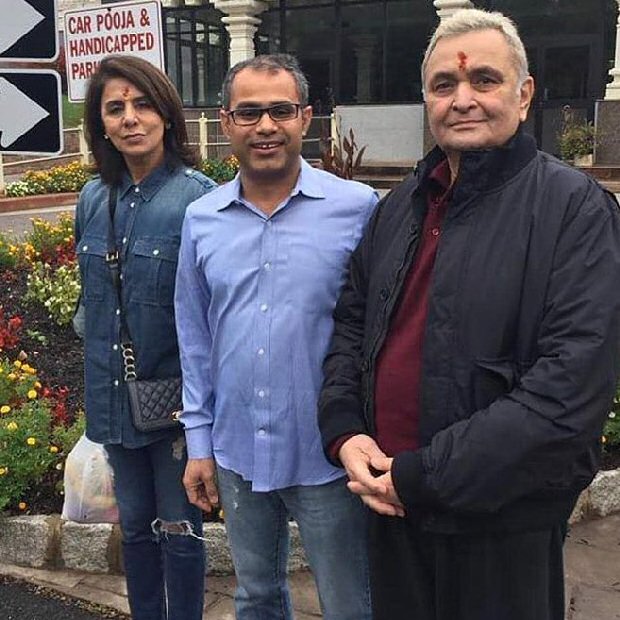 Well, if you are wondering how the fans are left quite reassured about the actor’s health then let us tell it is yet again because of social media. Rishi Kapoor and his wife Neetu Kapoor are currently in the Big Apple continuing the treatment of the actor. While we have also seen their son Ranbir Kapoor visiting, many of the actors from the fraternity like Priyanka Chopra, Sonali Bendre amongst others too paid a visit to the Kapoors to spend some time with them. Now, it seems that the fans who spotted the golden Kapoor couple in NYC were excited too!

In fact, we caught hold these pictures shared by a fan of the duo that has now gone viral on social media. It features Rishi and Neetu walking out of a temple after taking the blessings of the Lord. Also, yet another good news is that Rishi Kapoor is looking much healthier thereby fueling up reports that he is on the road to recovery. Not surprisingly, this has definitely put his fans in a better mood.

As for his hair transformation is concerned, readers may be aware that it had fueled up speculations that he is extremely unwell, with fans expressing their worry on social media. However, the actor had taken to the same platform to deny the rumours adding that the reason behind going completely grey is for one of his upcoming films. He made an announcement of doing a film with Honey Trehan and Sony Pictures, which was to be directed by Hitesh Bhatia.