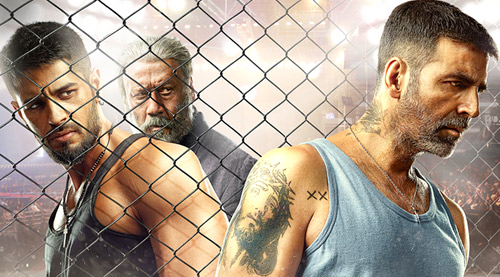 Monty Fernandez that they play in the film. However, they aren't the only men who had to follow a strict fitness regime. They were joined by even Jackie Shroff who, in the part of Gary Fernandes,


"Not many know but there is a younger version of Jackie Shroff that you get to see in the film. Though he is playing a 65 year old in the film, he also goes back three decades in time and plays a

man in the mid-30s. Since the makers didn't want to rely on the VFX to give Jackie a younger look, the actor took it on himself to follow a strict regime," informs our source.


Since two different shooting schedules separated Jackie from playing a 65 year old and 35 year old respectively, he had six weeks to get into shape.


"I was required to have a 37 inch waist for the older part. However, for the younger part, I had to come down to 32 inches. Moreover, I had to also lose more than 7 kilograms," informs Jackie, who

is 58 year old in real life, "I took it up in my stride and guess surprised people around me in my slimmer avtar."


This is for that part of the film where younger Akshay and Sidharth are 11 and 7 year old respectively.


It didn't just stop here for Jackie though. Since Karan Malhotra had designed a special look for Jackie, it wasn't just the beard but even the nose structured that went for a change.


"We worked a lot on the look," says Jackie, "To start with, Karan gave me a little broken nose. It had to look that way on screen due to which on every day of the shoot, the bridge of my nose took

one hour to set. Since I play an ex-boxer in the film, it went with the character. It is not on-your-face visible but does bring in a little change on my face. As for a beard as thick as this, I

have not done anything like this in my 37-38 years of film career. That was something altogether different for me too."


As for the entire body language, there was a good thought that went into that.


"In the first half of the film, I walk with a little swagger since I am drunk and totally reckless," he reveals. "However, in the second half there is certain tightness that comes in. Since there

are old aches and pains in the body, there is a bit of shuffle too that is prominent as I walk."


"No, not at all," he comes up with his characteristic laughter, "I have been acting for over three decades now. That's the least I can do."