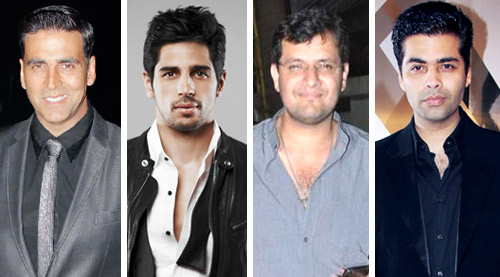 For Karan Johar, it was being back to the 70s when he was making Brothers. No, the film is not set in that era. However, the camaraderie that he saw between the three Punjabis - Akshay Kumar, Sidharth Malhotra and his director Karan Malhotra, was enough to make him believe that he had stepped back into the era when Bollywood sets were buzzing with all around Punjabiyat.

"The three men got along pretty famously right from Day One," informs our source, "Akshay is known to bring his Punjabi elements both on and off the screen, and loves to talk in his mother tongue whenever he gets a chance. On the other hand the two Malhotras, though unrelated, come from Punjabi families too. Since each of them knew the language, it became an official conversation tool for them. They got along pretty famously and Karan Johar, who is a Punjabi too, joined in. As a matter of fact, except for Jackie Shroff and Jacqeline Fernandez, most of the people on the sets were Punjabis."

Ironically, the film has the protagonists playing Christians, which means in front of the camera it was a different lingo altogether. However, the moment the camera was turned off, the trio turned on their Punjabi side in a jiffy.

"Akshay and Sidharth play David and Monty, and then along with Karan they used to discuss their scenes in Punjabi; can you imagine how it seemed when they would mouth their dialogues in Punjabi while preparing," chuckles Karan, "I used to burst out laughing so many times. It was like this huge Punjabi set from the 70s when filmmakers were all Punjabis."

This isn't where it ended as the men also used to bring rich Punjabi food from their house, hence resulting in the sets almost turning out to be a highway 'dhabha'.

"Yes, they all got very close to each other and the food along with language element integrated them all," says Karan.

He goes on to add, "It was Karan Malhotra who was the first to realize that Akshay and Sidharth actually looked like brothers. He found something similar about their jaw line and body language. He took the casting decision and I was more than happy to go ahead with his call. Guess he was right after all as not just do they have common looks and language, they are also similar people."

Guess the 'Punjabi Band of Brothers' indeed left an impression for Karan to savior.