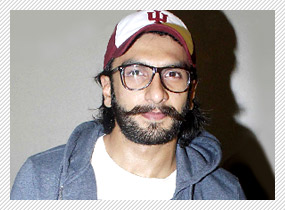 Ranveer Singh holds a unique distinction of being one of those few leading men who have been solo heroes in each of their first four outings - Band Baaja Baaraat, Ladies v/s Ricky Bahl, Lootera and Ram Leela. Naturally he has revelled on seeing a field wide open for him to perform. However, when it comes to his immediate next release, Gunday, he would be sharing screen space with another happening hero, Arjun Kapoor.

No wonder, tongues started wagging around their so-called rivalry, what with both Yash Raj discoveries indulging in a game of one-upmanship.

“No rivalry with Arjun” – Ranveer Singh

"Competition is bound to happen. Both are new to the B-Town, have showed immense promise, have even delivered hits and have an almost equal slate of upcoming films with prestigious banners. The only difference is that while Ranveer is an outsider, Arjun belongs to the inside world of the film industry. With the two coming together in Gunday alongside Priyanka Chopra as the centre of attraction, tongues are bound to wag around their rivalry," an insider comments.

Whatever may be happening in the background, neither of the two actors is biting the bullet and bringing anything out in the open. While Arjun has dismissed the theory already and says that there isn't anything wrong between the two, Ranveer feels that such speculations are expected but avoidable.

"I never had anything like this on my mind," says Ranveer, "Arjun and I have known each other even before we became actors. Now after working on Gunday, we know each other better. Besides eventually, I am sure that the way we come across on screen together would make for some cracking entertainment."

Continuing to talk highly about co-star, hence negating whatever insinuations that have been made so far, Ranveer says, "I think Arjun is wonderful to work with. I guess I had maximum fun working on this film. If you get into the space of one-upmanship, then it doesn't help. You have to be comfortable in your space."