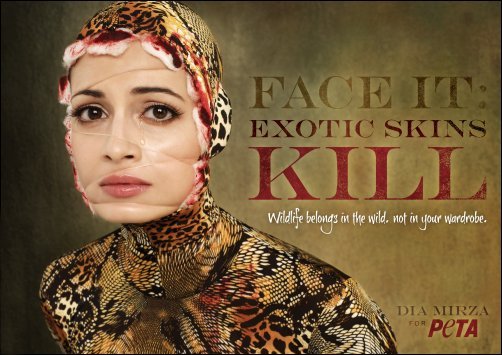 Wearing a fake snakeskin, Dia Mirza appears in a new ad for People for the Ethical Treatment of Animals (PETA) India just in time for Lakme Fashion Week which takes place March 2 to 6, in Mumbai. The caption reads, "Face It: Exotic Skins Kill. Wild Animals Belong in the Wild, Not in Your Wardrobe". The attention-grabbing ad, in which Mirza is "bloodied" to make it look as if she skinned alive - which is the case for many of the snakes used in the skin trade - was shot by ace photographer and longtime PETA friend Jatin Kampani. Nahush Pise applied the stunning make-up, and credit for the costume and styling goes to Theia Tekchandaney.

"Skinning animals alive or beating them to death for a pair of boots or a purse cannot be justified", says Mirza, an ardent PETA India supporter. "By choosing widely available fake snake and mock croc, you can pay tribute to these animals' beauty without stealing their skins and killing them."

Snakes, alligators and other exotic animals suffer greatly before their skins are turned into shoes, bags and other products. Snakes are often nailed to trees or posts and skinned alive. After the animals' peeled and mutilated bodies are discarded, it can take hours for them to die - usually from shock or dehydration. Alligators are often crammed into small spaces on factory farms and then beaten to death with hammers or axes.

PETA India recently honoured Mirza's production house, Born Free Entertainment, with a Hero to Animals Award for promoting the adoption of homeless dogs in the company's film Love, Breakups, Zindagi. While with this campaign Mirza joins fellow actor Raveena Tandon-Thadani, who also posed for a PETA India ad against the cruel exotic-skins trade.

Raveena Tandon takes an auto to her niece’s…