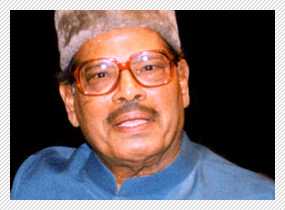 You can hear his melodies - Dey and night - and not tire of them. Such was the prowess of Dadasaheb Phalke awardee and Padma Bhushan Manna Dey, the singer who left us on October 24.

In a career spanning over six decades, Manna (his pet name that meant â€œthe little oneâ€ in his mother-tongue Bengali) Dey sang chiefly in Hindi, also in Bengali, and with a fair number of songs in Marathi, Gujarati and Bhojpuri. His oeuvre also included songs in almost every Indian language, a sizable chunk of non-film music, and many movie soundtracks in Hindi and Bengali as a composer.

'Hamari Hi Mutthi Mein Aakash Saara / Jab Bhi Khulegi Chamkega Taara' was his last popular song - from Nana Patekar's 1991 Prahaar. The lyrics seemed to embody Manna-da's (as he was affectionately addressed by colleagues, fans and friends) spirit and excellence - for the world was lit up like stars by that hypnotic voice whenever he opened his vocal mutthi (fist) to reveal the treasury within! Ironically, my first meeting with Manna-da was at this recording.

My personal discovery of Manna Dey's magnificent musical voyage was a gradual process. Rafi and Mukesh were the bulwarks of male playback when I began listening to film music and even making some kind of a childish study of it, and Kishore Kumar came in later.

The first song that probably made a mark for me was the Ravi-composed 'Ae Meri Zohra Jabeen' from Waqt, which was endemic when I was little more than a tot. I remember watching the landmark film in the theatre, in which this song came almost at the beginning and being affected by its beat and the sonorous voice of the singer.

But the true, stunning impact came with Kalyanji-Anandji's Kasme Vaade Pyar Wafaa' from Upkar, a film I did not even watch then, and a song that I thus never saw, for there was no television to access.

I confess that I was not too taken in by Manna Dey's singing or voice then, and realize with the wisdom of hindsight that it was because his songs were not filmed or lip-synched by the hottest actors of those times. I had begun noticing singers and composers even then, and I recall finding it odd that Shankar-Jaikishan and Salil Chowdhury reserved that one song, 'Ae Bhai Zaraa Dekh Ke Chalo' (Mera Naam Joker) and 'Zindagi Kaisi Hai Paheli' (Anand) for Manna Dey in Mukesh-based scores.

In my childish way, I remember thinking that Mukesh could have sung these songs too - why have a different singer here, that too someone who was best at singing 'Darpan Jhooth Na Bole' (Darpan), 'Nadiya Chale Chale Re Dhaara' (Safar) and similar background songs!

When I heard Manna Dey go on one of my already favourite actors, Dharmendra, in Seeta Aur Geeta, I mentally laughed at the 'silliness' of R.D. Burman! The same happened when I watched - on television - Manna Dey go on Raaj Kumar in Madan Mohan's Hindustan Ki Kasam ('Har Taraf Ab Yahi Afsane Hai'). This was one singer, I thought, who was alright for Mehmood (in so many films), Pran ('Yaari Hai Imaan' from Zanjeer had become the new cult song just months ago) or Premnath ('Jeevan Chalne Ka Naam' from Shor and 'Na Maangoon Sona Chandi' from Bobby).

Soon, however, wisdom began to dawn, through reading, listening and above all thinking. Chhaya Geet, the Doordarshan show on old and new film songs, exposed me to so many oldies, and I found Raj Kapoor also singing in Manna Dey's voice in older films like Chori Chori, Shree 420, Parvarish and Dil Hi To Hai.

The Dil Hi To Hai classic, 'Laaga Chunari Mein Daag' made me realize that Manna Dey was indeed superlative at classical intricacies, and I discovered also that one of my top favourite numbers in childhood, 'Parda Uthe Salaam Ho Jaaye' from the same film was also sung by Manna Dey!

And then I watched Pagla Kahin Ka and saw that the song Manna-da had sung so well, the comic 'Mere Bhains Ko Danda Kyoon Maara' was actually filmed on Shammi Kapoor. By that time, I had realized that Rafi, Shammi's voice in all the other songs of this film, could not have sung this one the way Manna-da had.

I had now begun to admire Manna Dey.

As my knowledge of film music improved, it struck home somewhere that Manna Dey, despite not being associated with the biggest stars as their main voice, was still counted among the biggest playback legends. I had by then listened also to some Marathi songs he had sung and decided to explore the treasury of this man further.

Luck was with me, as I became a journalist and went deep into research. A phantasmagoria of brilliance exploded as I delved into Manna-da's repertoire, especially through his compilation cassettes. I had met Manna Dey early on, with what I know now was a relatively superficial view of his work, which prevented me from asking him detailed questions and anecdotes about so many songs.

But as the magic unfolded and the discoveries and re-discoveries began, I realized the truth behind Manna Dey's own statement - that only Mohammed Rafi and he could sing everything.

Deeper study showed that Shankar-Jaikishan had not only used him exceptionally well and explored his full range but also got him to sing for heroes whenever a chance presented itself, come Shammi Kapoor (Ujala, Professor, Jaane Anjaane), Raaj Kumar (Mere Huzoor), Rajendra Kumar (Zindagi), Bharat Bhushan (Basant Bahar), Balraj Sahni (Seema), Sunil Dutt (Jwala) and even young heroes like Feroz Khan (Raat Aur Din) and Sanjeev Kumar (Sacchai). In many of these cases, there was no other film in which he sang for that actor.

A new hunt began - only to discover that except for Dilip Kumar, Guru Dutt and a young Rishi Kapoor, Manna-da had sung for every major hero all the way to Mithun Chakraborty. Yes, 'unthinkables' like Manoj Kumar, Jeetendra and Amitabh Bachchan are included too! And Manna- da was the first voice for Shatrughan Sinha's career in Ganga Tera Pani Amrit.

Watching these songs, one never found Manna Dey's voice sitting incongruously on any of them, despite our mental associations with other playback voices for these actors. Such was his brilliance and mastery over his art.

That period was indeed heady - hearing a classic like 'Bhay Bhanjana' (Basant Bahar) for the first time, re-discovering his brilliance in 'Ek Chatur Naar' (Padosan), 'Aao Twist Karen' (Bhoot Bungla), ' O Meri Maina' ( Pyar Kiye Jaa) and 'Jodi Hamari' (Aulad) - all songs immortalized by him as much as by Mehmood - and then moving on to the haunting strains of 'Ae Mere Pyare Watan' (Kabuliwala), 'Tum Gagan Ke Chandrama Ho' (Sati Savitri), 'Usko Nahin Dekha Humne Kabhi' (Daadi Maa) and 'Chalat Musafir' (Teesri Kasam). The last song was ripped off to make Mata bhent songs twice over by Narendra Chanchal in the '90s!

Today, I am an ardent lover of Manna-da the singer. Having met him twice for long meetings and having interacted twice more for 'phone interviews, I cherish Manna Dey the man as well. Though he is no more, and was inactive in Hindi cinema for over two decades, one can only feel blessed that he lived and sang long enough to give us so many sparkling numbers.