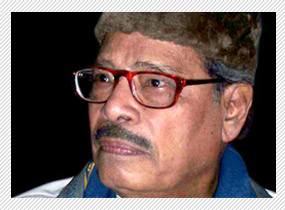 Remember the song '1956, 1957, 1958, 1959' from the film Anari? The film was released in 1959 and this was also the phase when India was emerging as a country that was keeping pace with the rapid developments across the world. Raj Kapoor, the original Showman, was looking for a voice that brought to fore the true essence of a developing nation and Manna Dey, the man with whom it all started with Shree 420, was roped in. The song, which detailed India's journey from 1956 to 1959, was sung with aplomb by the singer.


The magic continued for close to half a century later with Manna Dey being the most prolific male singer around who regaled listeners with his voice for his generations. With a National Award, Padmashree, Padmabhusan and a Dadasaheb Phalke Award coming in between, the 94 year old singer went on to sing not just in Hindi but also Bhojpuri, Magadh, Punjabi, Maithilee, Assamese, Oriya, Gujarati, Konkani, Marathi, Kannada, Malayalam, Sindhi, Awadhi and Chhatisgarrhi.


For someone who started his career in playback singing with Tamanna [1943], picking up his top songs would be nothing less than sacrilege. However, there are at least 10 of his notable outings during the six decades gone by where Manna Dey left an impressionable mark
1. Shree 420 (1955): 'Dil Ka Haal Sune Dilwala', 'Pyar Hua Ikraar Hua, Mud Mud Ke Na Dekh'


Think Raj Kapoor, think Manna Dey - This was pretty much the mantra in the 50s when the singer was a staple voice for the man who was not yet a Showman. It all started with Shree 420 where Manna Dey, Shankar-Jaikishan and Shailendra came together to deliver three tremendous hits that are heard till date. It would be tough to find a youngster from current generation who hasn't heard of 'Pyaar Hua Ikrar Hua', 'Mud Mud Ke Na Dekh' or 'Dil Ka Haal Sune Dilwala'


The 'jodi' was pretty much for the keeps and with Raj Kapoor & Nargis pairing up for a romcom Chori Chori, Manna Dey was more than happy to oblige with two smash hits - 'Yeh Raat Bheegi Bheegi' and 'Aaja Sanam Madhur Chandni'. Both songs had night as a setting and with the kind of seductive set up that Raj Kapoor promised, the romance with Nargis - both off and on screen - came alive.


The song of the revolution followed a few years later, albeit in a tone of celebration and joy. Coming together of Raj Kapoor, the musical team and Manna Dey was a trend that was becoming all the more solid and this continued well into the end of the 50s as well. A dance number which had a feverish pace to it (if one goes by the set up back then), 'Nineteen Fifty Six, Nineteen Fifty Seven' showcased Manna Dey in a different avatar that hadn't been hitherto seen.


Meanwhile the singer wasn't letting go off his classical background and was lapping on to the opportunities that other filmmakers and musicians were providing him. No wonder, he hit a six when C. Ramachandra offered him 'Tu Chhupi Hey Kanha Mein Tadapta Yahan'. There was nothing frivolous about this number and the results were exemplary.


As for the fun element, he had Chopras to thank. The unusual suspect was Balraj Sahni with Manna Dey fused flirting and chivalry in his own inimitable manner that could make even the current generation of girls blush. This is perhaps one of Dey's songs that has been heard again in countless films over the decades as well with a similar stage and setting.


It was inevitable though that Raj Kapoor and Manna Dey would be teaming up again soon after. This was evidenced in the folk number 'Chalat Musafir Moho Liya Re' which was as experimental and unique as it gets. Even as Raj Kapoor kept himself in the background and Waheeda Rahman looked on from a distance, Manna Dey sang like there was no tomorrow.


Not to be left behind, Shankar-Jaikishen ensured that there was more entertainment for the masses with a flirtatious 'Chunri Sambhal Gori Udi Chali Jaye Re'. Though Rajesh Khanna stayed in the background for this song which mainly had Asha Parekh as the centre of attraction, it was time to announce the emergence of a new romantic hero.


As for the pathos, Manna Dey was the man to hunt for. Pran was turning a new page in his career by going positive with Upkaar and Manoj Kumar wanted a voice that brought to fore the new side of the man who had left his villainy around. Indivar spun some magical words in 'Kasme Wadey Pyaar Wafa Sab' and Manna Dey made sure that the feeling of being hurt was felt.


A remarkable turnaround came through with 'Ek Chatur Naar Karke Singar' which stays on to be the most effective 'jugalbandi' ever to have emerged in the Hindi film scene. Along with Kishore Kumar and Mehmood, Manna Dey sang like no one was watching. The number stays on to be the biggest reason for Padosan to be still alive 45 years after it was heard first.


As for another timeless outing, there is 'Aye Bhai, Zara Dekh Ke Chalo' which brings this Top-10 list back full circle. Raj Kapoor, Shankar-Jaikishen and Manna Dey knew that for this epic film, there couldn't be any compromises. The Showman had put all his dreams in motion for Mera Naam Joker and though there was some 'thokar' ahead, the team still imparted a lesson of 'Aye Bhai, Zara Dekh Ke Chalo'.