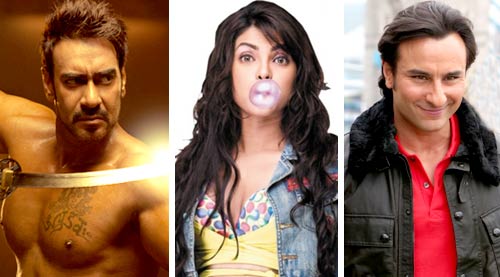 In Prabhu Dheva's Action Jackson, Ajay Devgn will be seen in three different avatars. Would he able to break the jinx on heroes playing multiple roles? History is witness to ambitious films which designed more than two roles for superstars that have collapsed at the box-office.

Here is a list of ambitious multi-role projects for the stars that have failed.

1.  Dilip Kumar in Bairaag: The mighty thespian who had triumphed resoundingly in a double role in Ram Aur Shyam returned in a made-to-order triple role as a blind father and his two sons, one of the sons too being blind. No wonder the audience rejected this blind man's bluff. The film released in 1976 was expected to break records. It was a mess in every sense. Dilip Kumar didn't return to acting for the next 7 years.

2.  Amitabh Bachchan in Mahaan: The Big B at the peak of his career delivered this dud in a triple role playing father and two sons. The mega-star had succeeded in many double roles. But three? Maaf karna! He also played a triple role in Hrishikesh Mukherjee's Bemisal which was also a flop.

3.  Sanjeev Kumar in Naya Din Nayi Raat: Sanjeev Kumar in 9 different roles including a gay character, was astonishingly credible in different get-ups. The same story had been a big hit when Sivaji Ganesan played the 9 parts in Tamil and A. Nageshwara Rao in Telugu in Navarthri.

5.  Priyanka Chopra in What's Your Raashee: 12 Priyanka Chopras at the price of one ticket? You've got to be kidding! But no. Ashutosh Gowariker wasn't joking. Seriously.

6.  Saif Ali Khan in Humshakals: 3 Saifs, 3 Ritesh Deshmukhs and 3 Ram Kapoors...enough to put audiences off all triple roles for good.