Mouni Roy is one of the most significant names in the Hindi film industry enjoys a massive fan following. Whether it is her stylish dressing sense, her holiday pics or her acting skills, the actress remains in the headlines every now and then. 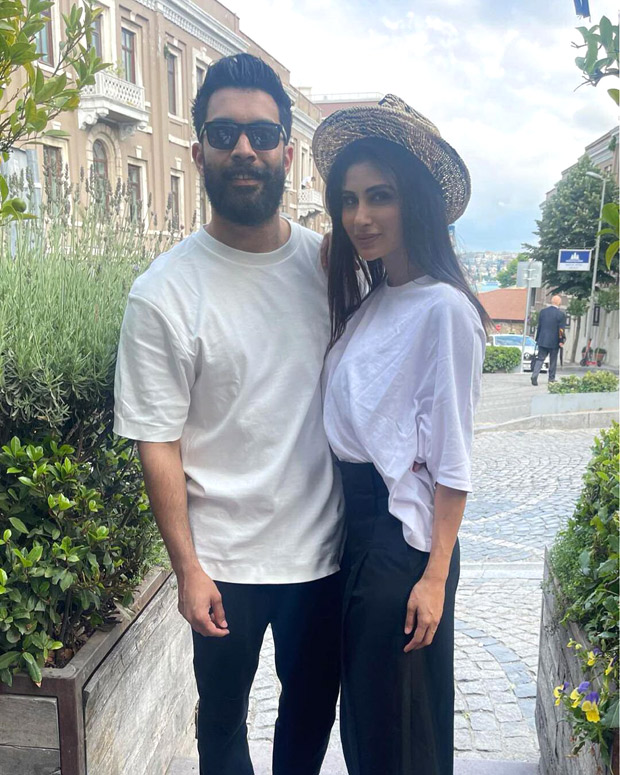 Mouni has received appreciation from the audiences for her television serials such as Naagin and Devon ke Dev Mahadev. She has now made it to the big screen with her blockbuster film, Gold. She also delivered a power packed performance in the trailer of her upcoming film, Bhramastra.

The actress recently got hitched to her long-time beau Suraj Nambiar in a private wedding ceremony in Goa. She shares a little glimpse of her married life regularly through her social media handle. The fans are always delighted to see the couple together as they are all heart eyes for each other.

Mouni, recently took to her instagram handle to post a picture of her with her husband, Suraj. The adorable picture went viral over the internet in just a few minutes. In the picture, Mouni can be seen wearing an oversized white t-shirt with black pants and on the same hand, Suraj can also be seen donning an off-white t-shirt with black pants. The couple, as they matched their outfits, left the fans in awe of them. Mouni also put up a symbol of infinity as she shared the picture on her Instagram account.

Mouni who is presently seen on the dance reality show, DID Li’l Masters season 5 is all set to sweep off the feet of the audiences with her fierce avatar in Ayan Mukherjee’s upcoming Bhramastra. The film will also feature Ranbir Kapoor, Alia Bhatt and Amitabh Bachchan in prominent roles. The film will hit the big screen on September 9 this year.

Also Read: No more Tera Mera Saath Rahe! Here’s a note penned by Mohammad Nazim for fans who will miss the show from today