Last Updated 05.07.2022 | 12:34 PM IST
feedback language
follow us on
Bollywood Hungama » News » Bollywood Features News » The Kapil Sharma Show cast poses for a happy picture as they jet off to Canada for tour

The Kapil Sharma Show is one of the most-loved comedy shows on television. The success of the show has crossed the sky as the show leaves the audiences in splits with its hilarious performances. 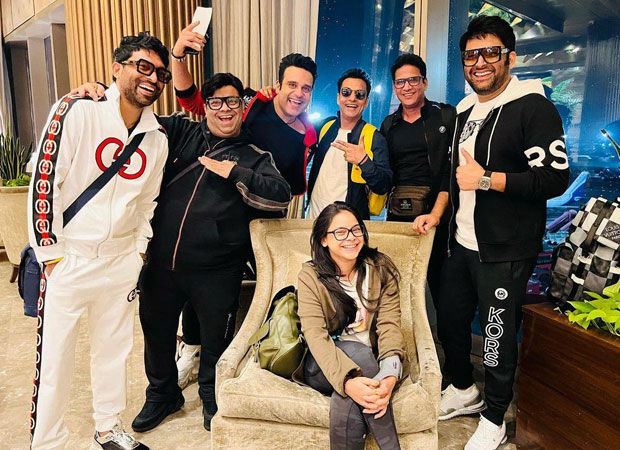 The show, hosted by Kapil Sharma has made its way into the hearts of viewers who enjoy to the show that airs on Sony Entertainment Television. The whole team of the show is very excited for their world tour. The cast of the show will be travelling to various places to perform.

Kapil Sharma took to his official Instagram handle to post a happy picture of the whole cast as they are ready to jet off to Canada. The cast will perform in Canada as part of their tour. In the picture shared by Kapil, all the cast members including Krushna Abhishek, Sumona Chakravarti, Chandan Prabhakar and Kiku Sharda are all smiles as they are ready to leave for their tour. Kapil, as he posted the picture, wrote, “Flying to Vancouver now can’t wait to meet our lovely fans in Canada.”

Before taking a break from television, the last episode of The Kapil Sharma Show was with the team of JugJugg Jeeyo. The actors of the film including Varun Dhawan, Manish Paul, Anil Kapoor, Kiara Advani and Prajakta Kohli marked their presence on the comedy show. The show, while on a break, has been replaced by another show with a similar theme of comedy titled Laughter Champions. The show will be judged by Archana Puran Singh and Shekhar Suman.

Meanwhile, Kapil Sharma will also be seen on Mika’s latest reality show, Mika Di Vohti. Kapil, along with legendary singer Daler Mehndi will be seen supporting and assisting Mika in looking for his bride.

Also Read: Actor Vishal Aditya Singh flaunts his chiseled body, reveals he did not hit the gym in a year