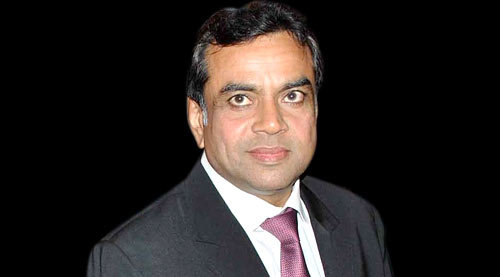 "I am totally in favour of Anurag Kashyap. It's stupidity to insert 'smoking is injurious to health' warnings," said Paresh Rawal in a Bollywood Hungama interview in Abu Dhabi recently. Rawal is not merely an actor any more. He is also a Member of Parliament and a committee member in the Information Technology ministry. The film industry has high hopes from him in taking up valid causes on a national stage. He spells out his views on the Censor Board regulations and why there ought to be more clarity on what audience can watch and what they can't. "Steven Spielberg was justified when he said that he won't release his film Saving Private Ryan in India if the Censors remove even one frame from the film," Rawal reasoned. He also opened up about the biopic of Indian Prime Minister Narendra Modi and what challenges he foresees in enacting a man who is alive and hugely debated all across the world.

How has been the experience of Welcome Back?

Bahut mazaa aa raha hai. It's good to get back together with the cast. And the addition of Naseer bhai has only added to the fun.

You'll be multitasking now since you are also a Member of Parliament now. And also, you dabble in theatre as well besides acting in films. How challenging has it been?

It's very easy, yaar! You're required to attend Parliament sessions yearly for 80 to 90 days. Add 10-15 days more since I am a committee member in the Information Technology department and hence I need to attend its meetings. That leaves me with almost 265 days. An actor of my caliber is required to work for only 30 days in a film. Hence, I can at least do 6 films a year. For the rest of the days, I can attend to my constituency. As for plays, I need to devote only 3 hours for each show. Hence, it's easily manageable.

Yes, because I'm not getting exciting work. I should be offered something challenging or excitingâ€¦

Yes or even something on the lines of Oye Lucky Lucky Oye.

Yes, we are working on it. We have almost cracked the idea and it's very exciting.

Will Akshay Kumar be producing it again?

Yes of course. And I'll be producing as well. Umesh Shukla will be directing again.

Would you like to adapt another Gujarati play for Hindi cinema?

Yes. My play Dear Father will be made into a film by Ashutosh Gowariker.

You recently praised the Pakistani TV shows screened on Zee Zindagi. With regards to that, where do you think Indian serials are lacking?

Our serials are regressive. It goes on and on. And we have it in us to make good serials. Didn't we come out with TV serials like Buniyaad?

And what's the latest on the biopic of Narendra Modi, in which you'll be playing the lead role?

What are your views on the obsession behind Oscars?

I have never been able to understand how is a film judged and what's the criteria for sending a film to the Oscars. Forget Oscars, the local award ceremonies didn't even honour OMG Oh My God and I am just not able to understand why.

Since you are a part of the government, do you plan to take any progressive step for the film industry?

I believe that there shouldn't be any government interference. Experienced people from the film industry should be the decision makers and they should reach at a conclusion by discussing the issue healthily without getting into fights and arguments.

What are your views on Censor Board and their recent stringent measures like inserting anti-smoking disclaimers?

I am totally in favour of Anurag Kashyap. It's stupidity to insert 'smoking is injurious to health' warnings. Why don't they stop the production of cigarettes instead? Aap aaina pochte hai, mooh nahin dhote! Poor guy Anurag had to stop the release of his film to fight for justice. On the other hand, the Censor Board has no issues with ads depicting a guy sitting in nothing but underwear and having kissing marks all over his body.

However, the Censor Board acts high handedly and for Hollywood films, they chop off basic lovemaking scenes and still give the film an adult certificateâ€¦

That is why Steven Spielberg was justified when he said that he won't release his film Saving Private Ryan in India if the Censors remove even one frame from the film. If they have reservations about the content, then they can give an adult certificate. But even after giving an 'A' certificate, they remove scenes from the film. There are so many vulgar songs shown on TV and also there's Fashion TV. Do they censor all these things as well? If someone makes a film on Kamasutra, that person can't show two flowers clashing with each other, right?

What are your views on the recent incident of Censor Board CEO Rakesh Kumar getting arrested on charges of corruption? Allegedly, filmmakers used to bribe him in order to get a certificate for their filmsâ€¦

You played Sardar Vallabhbhai Patel in 'Sardar'. But he's no more. And now you'll be playing Narendra Modi who is very much alive. How tough will that be?

It's going to be very tough. Making a biopic is a challenge in itself. Also, you can't mimic that person. You have to represent the spirit of that person. Main kitna bhi koshish karoon, main Sardar Patel nahin lagoonga. But if I am able to get alive the spirit of his character, his style of talking and the intensity that was there in his eyes, then it's more than enough.

So have you taken Narendra Modi's approval and shown him the script?

It's a biopic and so he knows what the script is all about. And I told him that I'd like to do a biopic on him. And he was fine with it. I asked again, just to be sure. And he again replied in the affirmative. Woh truly alag kisam ka banda hai!