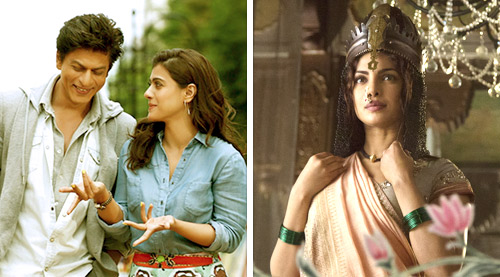 The hottest topic of discussion on the social media, in newspapers & the trade circles off late has been the clash of 2 keenly anticipated films this Christmas - Rohit Shetty's comic entertainer Dilwale featuring Shah Rukh Khan, Kajol, Varun Dhawan & Kriti Sanon and Sanjay Leela Bhansali's magnum opus Bajirao Mastani starring Ranveer Singh, Priyanka Chopra and Deepika Padukone. While a lot of people are speculating that one of the two films will shift from the 18th of December to another release date, as of now the clash seems definite.


I can't deny the fact that both the films will impact each other's business if they release together, but to what extent, is something everybody needs to put some serious thought to! The screens and shows will be divided and thus, the potential opening net capacity for both the films would be reduced drastically compared to a solo release. However on the flipside, the theory that the stronger of the two films will crush the other is absolutely baseless and silly! Films that have meritorious content can certainly co-exist at the cinemas simultaneously and more so, do extremely well in the entirety of their respective runs! All it takes is a change of perspective - to look at the macro level scenario of the film's lifetime collections (which is what eventually matters) rather than chase the record for the highest opening weekend collections (which is nothing more than an irrelevant rat race).


Let's do the maths around this - If you are a fan of SRK and you want to watch Dilwale, you'd probably try to watch it on the day of its release? If you don't get the tickets due to the reduced number of shows (compared to what could have been the scenario had it released solo) you certainly would watch it the next day? If you still don't manage to get the tickets over the weekend, you are certainly not missing out on the opportunity of watching it on Monday when the rush reduces substantially? Irrespective of when you watch it, you know you're watching it for sure! And it would be exactly the same case with Bajirao Mastani as well! If Lagaan and Gadar came together, Dil and Ghayal released on the same day, Jab Tak Hai Jaan and Son Of Sardaar clashed, Taare Zameen Par and Welcome hit the screens on the same day and all of them did outstandingly well, why do we need to brew insecurities around two of the most anticipated films that are slated for release later this year? More recently, Salman Khan's mammoth blockbuster Bajrangi Bhaijaan & SS Rajamouli's epic scaled Bahubali (which released during the last week of Ramzan - a period that has traditionally been unfavourable for business) hit the cinemas within a gap of one week from each other and both have gone on to join the league of highest grossers of all time!


If two films that genuinely have the merits for drawing in the crowds come together, they will find their audience! The hypothesis that one of the two films releasing on the same day killed the other's box office prospects is extremely over rated! Let's face it - if a film doesn't work at the box office, it's because it lacks the merit to do well and not because of the factors that we try to push the blame on! On the flip side, if two keenly anticipated films release on the same day, their clash generates excitement and enthusiasm among the fans of the stars involved and gives the movies an impetus that propels them to fantastic results at the box- office.


I'd really love it if the companies backing the X-Mas releases come together and work towards ensuring suitable showcasing for both the films and shatter the silly belief that two movies that deserve to do well cannot co-exist in the cinemas and I have a feeling it is going to happen this December! Start preparing for the fireworks already! We're all going to have more reasons to celebrate than just Christmas!