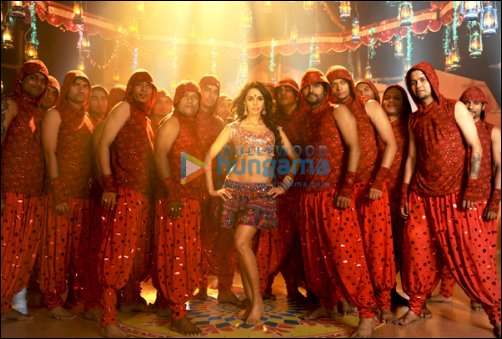 Move over Malaika and Katrina, Mallika Sherawat is here. In what seems like an open challenge thrown at the throne of the two hottest item queens of the moment, Mallika Sherawat danced to an item song at Yash Raj Studios on Wednesday, whose words blatantly mocked Katrina and Malaika's twin triumphs.

Apparently, the 'Munni' and 'Sheila' choreographer was approached to do Mallika's 'Shalu Ke Thumke'. But Farah Khan begged off saying she only choreographs for very close family friends.

According to a source, the lyrics were originally quite different for the song. "By openly singing that she's better than 'Munni' and 'Sheila', Mallika is sending out a clear signal to the entertainment industry. It was Mallika who wanted the Munni-Sheila element incorporated into the song. Composer Anand Raj Anand modified the tune accordingly.

Mallika wants to position herself as the no.1 item queen of Bollywood. She feels her 'Maiyya Maiyya' in Guru came long before 'Sheila Ki Jawani' and 'Munni Badnaam'. This year she has already performed three item songs... and is open to more.