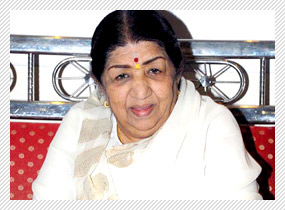 Lata Mangeshkar talks about her plans for her music label LM Music...


Congratulations, you've launched your own record label L M Music. What are your plans for your music company? I believe you will now be singing with Mr. Amitabh Bachchan?

Yes! I want to sing with Amitji for sure. We had come together for a duet 'Yeh Kahan Aa Gye Hum' in Yash Chopraji's film Silsila many years ago. But we didn't record it together. I had sung my portion. And later Amitji had recited Javed Saab's poetry.


What would you be recording with Mr. Bachchan?

I believe he is keen to do shlokas of Lord Tirupati with me. I'd love to do this project with him. I've spoken to him about it already. He has also been kind enough to give the voiceover for an album of devotional songs by Suresh Wadkar released on our label. Suresh had recorded the Kabir Bhajans many years ago but never released the album. When I heard them I thought they just needed some brushing up. That's where Bachchan Saab's commentary came in.


What are the other albums to be released on the L M Music Label?

We've already released several spiritual albums, and a children's album by my sister Meena. In that album Meena's granddaughter has also sung. In fact during the music-label launch function on January 15, Meena's granddaughter kept rushing to the stage to repeatedly touch Amitabh Bachchanji's feet (laughs). I've also released an album of Bhakti geet 'Har Har Mahadev' with Shankar Mahadevan accompanying me. Then there is an album of Buddha chants entitled Buddham Sharman Gachchami featuring 11 artistes including Hariharan, Shankar Mahadevan, Pankaj Udhas, Anoop Jalota, my sister Asha and me. This is the first time I've sung in Pali. We also have classical vocalist Jeetendra Abhishek's son Shounak singing Bhau Geet for the first time. Shounak's sister who is my sister Meena's daughter-in-law has also sung in that album.


The label launch function was attended by the likes of Mr. Bachchan, Neeta Ambani, Sridevi and Boney...

Yes, a lot of distinguished people from the film industry showed up for the function. I am fortunate to have so many lovely people's best wishes. Whoever we invited showed up for the function. I am blessed. It was a quiet evening. Four of us Bachchan Saab, Neeta Ambaniji, Pandit Jasraj and I were on stage. Neetaji and Amitji are so busy yet they came to my function for their love of me. Pandit Jasraj is not well and yet he came. Jasrajji released the album.


What has the feedback to your label been so far?

The feedback to my music label has been heartening. I completed 70 years of singing in 2012. I am deeply indebted to the people of India for liking my voice for so many years. What would I have been if it wasn't for the love of the people? It's my duty to give something back to the music industry now.


What are your future plans for the label?


Any plans for upcoming singers?

But my ardent wish is to create a platform for these children who are seen on reality shows after which they vanish from the music scene. They are known only as long as the show lasts. We want to create our own music show where winners from these shows get a second chance. Those selected from our show can go on to record songs on our label. I feel their talent and hard work are getting lost.