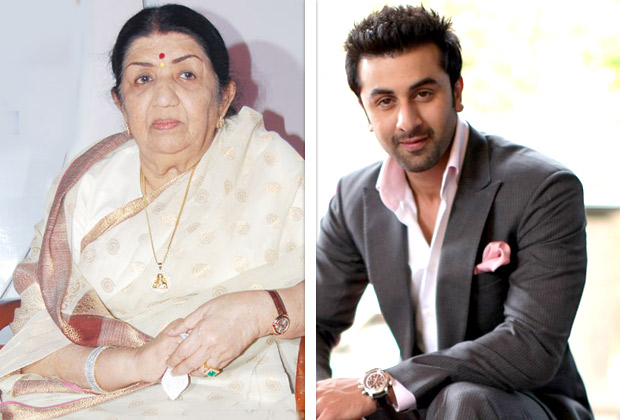 2. When Ranbir was a child he would run around his grandfather Raj Kapoor’s home as some of Raj Saab’s greatest songs for his film Satyam Shivum Sunderam, Henna and Ram Teri Ganga Maili were created in Lataji’s voice.

3. Ranbir once told me he would love to play Lataji in her biopic, if only he was a woman. Ranbir was carrying forward what Shah Rukh Khan had said about Lataji. “I wish she could sing for me.”

4. Lataji has sung for 4 generations of Kapoors. She sang in Awara and Mughal-e-Azam which starred the great Prithviraj Kapoor. She sang innumerable memorabilia for Prithivraj Saab’s son Raj Kapoor’s cinema. And also in the cinema of Raj Kapoor’s brothers Shammi and Shashi Kapoor. When Raj Saab’s sons Randhir, Rishi and Rajeev made their debut Lataji’s voice was supreme in Rampur Ka Laxman (Randhir’s post debut hit) Bobby and Ram Teri Ganga Maili.

5. Though Asha Bhosle was Ranbir’s mom Neetu’s main voice in the movies she did as a leading lady Lataji sang for ‘Baby Neetu’ in her first film Do Kaliyan when at the age of 7 Neetu played a double role. Lataji sang ‘Bachchemann ke sachche’ and ‘Murga murgi pyar se dekhe’ for the little adorable Neetu.

6. Except Shashi Kapoor’s wife Jennifer Lataji has also sung for practically every Kapoor woman from Nargis to Kareena Kapoor.

9. Recently when Lataji honoured Ranbir’s father Rishi Kapoor with an award named after her father, Ranbir also attended the event. Ranbir paid his respects to the voice that gave soul to his grandfather’s films by touching her feet. Lataji recalled seeing Ranbir run around as a child.

10. Curiously Lataji has never sung in any Ranbir Kapoor starrer.