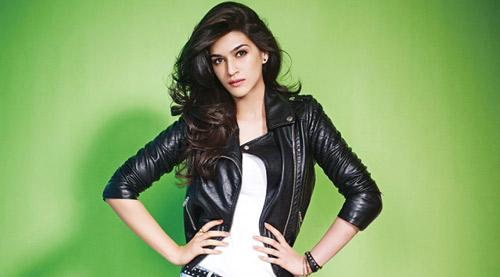 More than 20 months after the release of Heropanti, Kriti Sanon is now returning to the big screen with a Hindi film of hers, Dilwale. It couldn't have been a better continuation for her in the industry, what with the film looking bright and entertaining with the entire package deal involving Shahrukh Khan, Rohit Shetty, Varun Dhawan and Kajol as the key attractions. For young Kriti, it is also a platform to make an impression, and a quick one at that, considering the fact that she is surrounded by abundant talent all around. Very importantly, she also had to make sure that a sisterly bond was established well with Kajol.

"I had to really act-act here since in real life, I am the elder one and my sister is four years younger to me. She listens to me more than how much she would listen to my mom. So if she is doing something wrong, she may not listen to mom but would hear me out," smiles Kriti, "She has passed college and has turned 22. I do know that a sisterly bond is."

However, when it came to Kajol, Kriti had to really work hard as there is an age difference between the two.

"I have to really feel within me that Kajol ma'm is my elder sister," Kriti says, "Otherwise, between my sister and I, we can even hit each other. However, the whole bond is different in the film. With Kajol, the sister factor is more like a motherly bond; you know like someone who has taken care of you. This isn't all as we had to establish that on-screen bond quite quickly since there aren't many scenes in there where we are there together on a one to one basis."

This isn't all as there was a respect factor that came in too.

"She has been in the industry for more than 20 years. So, of course, I was a lot conscious," acknowledges Kriti, "The first thing that I had to do was to think as a character. See, sometimes what happens is that when given a dialogue, one tends to get a little excited. There was a scene where I had to be a little rebellious, so I went ahead with that kind of tone. This is where Kajol ma'm said to me that I was acting this way due to the manner in which the lines are written. However, since I was playing a younger sister, I could do better by not being so rebellious in answering back and instead act a little scared with not such kind of disrespect being shown."

The confrontation scene turned out to be better than it was envisaged.

"Yes, it was so beautiful; you know these kinds of little things help. There are moments when we hug and it came out well. That said, if my elder sister is like Kajol ma'm, then I would be a little scared. So, what you see on screen actually comes across as quite natural" smiles Kriti before signing off.